Could America Be Wrong About Ukraine? 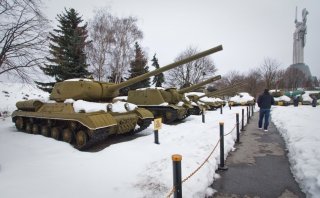 Here's What You Need to Remember: However, this prevailing view is premised on a grossly misguided understanding of Ukrainian society and political culture—one that jettisons the historical complexity of Ukrainian political identities in favor of a shallow liberal-developmentalist model that forces millions of Ukrainians into a nation-building project that they want no part of.

The impeachment hearings in the House of Representatives have demonstrated  a near-unanimous consensus among Washington experts and politicians regarding Ukraine policy, best expressed in the closing remarks of Rep. Adam Schiff’s (D-Calif.): “We should care about Ukraine. We should care about a country struggling to be free and a Democracy . . . but of course, it’s about more than Ukraine. It’s about us. It’s about our national security. Their fight is our fight. Their defense is our defense. When Russia remakes the map of Europe for the first time since World War II by dint of military force and Ukraine fights back, it is our fight too.”

Former Ambassador to Ukraine Bill Taylor echoed a similar sentiment in a recent New York Times op-ed: “To support Ukraine,” wrote Taylor, "is to support a rules-based international order that enabled major powers in Europe to avoid war for seven decades. It is to support democracy over autocracy. It is to support freedom over unfreedom. Most Americans do.”

The Washington consensus offers what is admittedly a gripping narrative: not only the U.S. government but every American citizen is morally bound to support a fledgling Ukrainian nation locked in a mortal struggle to defend its democracy against foreign invasion.

However, this prevailing view is premised on a grossly misguided understanding of Ukrainian society and political culture—one that jettisons the historical complexity of Ukrainian political identities in favor of a shallow liberal-developmentalist model that forces millions of Ukrainians into a nation-building project that they want no part of.

There is an understandable temptation to trace the roots of the current Ukraine-Russia conflict from the end of the Cold War. Following the Soviet collapse and establishment of an independent Ukrainian state in 1991, so the narrative goes, a westward-oriented Ukrainian people fought for over a decade to break free from the corruption of the Russian-aligned Kravchuk and Kuchma governments. In this rendition of Ukrainian history, the 2004 Orange revolution was the first attempt of the Ukrainian people to assert their sovereignty and pro-western leanings. But Ukrainian striving toward a western, democratic way of life was subsequently crushed by the 2010 presidential election victory of Viktor Yanukovych, who promised a third way between Moscow and the west but proceeded to surrender Ukrainian sovereignty to the Kremlin. The 2014 Euromaidan—also known as the “Revolution of Dignity”—finished what the Orange Revolution started, ousting Yanukovych and manifesting Ukraine’s popular will toward Atlantic integration. But a free and democratic Ukraine represented a mortal threat to the stability of Putin’s autocracy, and so the Kremlin moved to trigger the current crisis in Eastern Europe by annexing Crimea and invading the easternmost part of the Donbass region to the country’s southeast.

There are numerous problems with this consensus narrative, many of which were surveyed in a recent National Interest article by Vice President at the Center for the National Interest George Beebe. But there is a core issue at work, one that merits closer attention than it has received from the Washington expert community. The popular trope of a life-or-death struggle between democratic Ukraine and authoritarian Russia is premised on the idea that the Ukrainian people are united in their pursuit of western integration; nothing could be further from the reality of Ukrainian politics. In fact, contemporary Ukraine is what political scientist Dmitri Trenin calls a cleft state: a complex patchwork of mutually exclusive identities and clashing political loyalties, sewn and resewn over centuries of imperial competition in Eastern Europe.

Ukraine's vast diversity of national identities won’t come as a surprise to any student of Eastern European history. “Ukraine,” Russian for “borderland,” developed as an unstable amalgamation of border peoples—including ruthenian peasants, Zaporozhian Cossacks, Russian settlers, Belorussians, ethnic Poles, Hungarians, and Jews—whose ethnic composition has ebbed and flowed at the intersection of the seventeenth and eighteenth-century Polish-Lithuanian, Russian, Austro-Hungarian, and Ottoman territorial ambitions. The full story of Ukraine’s tenuous national emergence is far too long to relay here, but recent research conducted by American University Professor Keith Darden demonstrates that many of Ukraine’s current regional cleavages can be traced back to the way that Ukraine was administered during the Russian Imperial period. As part of the Novorossiya—New Russia—project initiated under Empress Catherine II, large swathes of Eastern Ukraine were settled by ethnic Russians and effectively absorbed into a greater Russian cultural sphere. By stark contrast, the Russian Empire pursued a strategy of indirect administration for the western Ukrainian regions annexed after the second Polish partition of 1793, ruling through the authority of local Polish nobles who continued to uphold the Polish language and Polish education. At the turn of the nineteenth century, the Novorossiya project partially succeeded in creating a “little Russian” identity composed of ethnic Russians settlers and Russian-speaking Ukrainians in eastern Ukraine, even as the Polish landowning nobility retained its dominance in the formerly Polish lands west of the Dnieper. Thus, the seeds were planted for deep-seated regional cleavages that would dominate Ukrainian politics for the next two centuries and onto the present day.

No one better captures the volatility of Ukrainian nationhood than playwright and writer Mikhail Bulgakov, whose magnum opus Days of the Turbins offers a haunting portrait of a Kiev intelligentsia desperately vacillating between Symon Peliura’s nationalists, the German Imperial Army, the White forces, and the Red Army during the revolutionary years of 1918–1919. In the Soviet period that followed, the latent tensions between its disparate constituent groups prevented Ukraine from shedding its premodern identity and becoming an internally coherent nation at peace with itself. Unsurprisingly, historian Alexander Statiev found that the overwhelming majority of Ukrainian anti-Soviet insurgent activity between 1944 and 1953 emanated from the western borderlands.

Although the Soviet secret police apparatus succeeded in suppressing all of the many 1940s anti-Soviet resistance movements in the western borderlands, latent anti-Soviet sentiment continued to predominate across western Ukraine through the end of the Cold War.

Today, Ukraine’s pre-modern cleavages are clearly reflected by the country’s electoral map. Local support for the 2004 Revolution, anti-Russian/pro-Western candidates in 2010 Presidential and 2012 Parliamentary, and the 2014 Ukrainian Revolution is positively correlated with the lack of historical Russian influence in a given region. Conversely, support for Russian-aligned candidates is highest in the Russophone and culturally Russian regions of the East and South.

Ukrainian support for Euro-Atlantic integration on the one hand, and preference for the cultivation of Russian ties on the other, has remained remarkably consistent along regional lines. Western Ukrainians comprise around 20 percent of the population, but played an outsized role in the events of the Ukrainian Revolution and continue to comprise a large chunk of Ukraine’s political elite.

These same divisions are readily observed in more recent times. Popular support for western-style nationalist Petro Poroshenko during the presidential election of 2014 was lowest in the easternmost Donbass region and peaked in westernmost Ternopil. Even during the presidential election of 2019, the massively unpopular Poroshenko still managed to win around 20 percent of the popular vote from voters concentrated in Ternopil and neighboring Lviv. Ivano-Frankivsk, one of west Ukraine’s most consistently anti-Russian provinces, opted for the far-right nationalist Andriy Biletsky.

So much as a cursory glance at Ukraine's electoral map reveals that NATO and EU accession is not, and has never been, the unanimous goal of “the Ukrainian people.” It is rather a reflection of an exclusionary, western Ukrainian nationalist vision that is widely rejected across the country’s eastern half—that same vision was violently rejected by the people of Donetsk and Luhansk, whose decision to secede from the Ukrainian state in 2014 led to the ongoing war in Donbass. If nothing else, the winding and complex history of Ukrainian identity reveals the exact opposite of Ukraine so fervently portrayed by the media and policy establishment over the past year; far from a “a nation that has broken from its troubled past to embrace European and Western values and that seeks to join European and North Atlantic institutions,” Ukraine is a deeply divided post-Soviet state struggling to stitch together a coherent constitutive story from contradicting imperial legacies.

U.S. intervention in the ongoing Donbass conflict is not, despite appearances, an expression of solidarity with a beleaguered Ukrainian nation united against Russian aggression. Rather, it is an intervention on behalf of some Ukrainians against other Ukrainians; an act of picking winners and losers in Ukraine’s ongoing struggle to sift through the consequences of Euromaidan. Helping one segment of the Ukrainian population to forcefully impose their ethnonational identity on another will contribute neither to a Europe nor to a Ukraine, whole and free. It is a recipe for precisely the kind of escalating civil war and prolonged regional instability and that Washington, Brussels, and the Kremlin have been trying to avert.