Could Michael Jordan Have Won Another Championship with the Bulls? 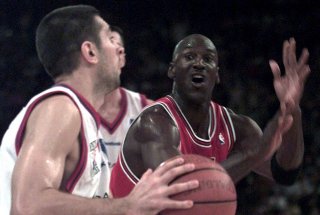 As all fans of “The Last Dance” know, the Bulls’ management sought to break up the team after 1998 season and begin a rebuilding project. That meant the departures of not only Jordan, but Scottie Pippen, Dennis Rodman, and coach Phil Jackson.

Jordan, on the other hand, wanted at the time for all of them to return for one more run.

Would the Bulls have won another championship, had they all come back for one more shot?

We will never know, of course. But there are reasons to think that they would have had a good shot at one more title.

In real life, the gang broke up. Jackson resigned as coach, Jordan retired, Pippen was traded to the Houston Rockets, and Rodman signed with the Los Angeles Lakers. Tim Floyd was named the team’s coach, and the team was led by holdover Toni Kukoc, along with third-tier free agents like Brent Barry and Andrew Lang. The team finished with a record of 13–37 and followed up the title-filled Jordan era by missing the playoffs.

The NBA that year started late, due to a lockout that continued until January of 1999, and Jordan did not formally announce his retirement until the lockout was over. Once the season began, the New York Knicks – the team Jordan had overcome in the playoffs so many times throughout his career – broke through and won the Eastern Conference, just as they had after Jordan’s first retirement in 1994. And just like in 1994, the Knicks lost in the NBA Finals, this time to the San Antonio Spurs.

We will never know how that season would have turned out differently if Jordan and the Bulls had remained intact. But there is a good chance they would have at least gotten through the Eastern Conference. The Knicks won the East as an 8th seed, with Patrick Ewing injured. The top teams in the East that year, the Miami Heat and Indiana Pacers likely would have been no match for even an older Jordan. The Spurs, who had that point had both David Robinson and Tim Duncan, would have been a tougher matchup, but Jordan had tougher ones in his career.

Jordan, of course, became a team executive with the Washington Wizards not long after retiring and would go on to return to the Wizards as an active player in the 2001 season, although Jordan would never get the Wizards anywhere close to a championship either as an executive or player. Jordan even hinted in his infamous Hall of Fame speech at making a comeback at age 50, but that never happened.