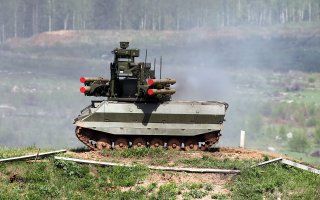 Here's What You Need to Know: It could be 10 to 15 years before successful autonomous engagement is developed.

The Russian military recently revived its BMPT (Tank Support Fighting Vehicle) "Terminator" platform, but efforts to develop a true killer robot are also moving forward. This week it was announced that state trials of the Uran-9 tracked unmanned combat ground vehicle (UCGV) have been moving forward – and it isn't the only robotic platform currently in development.

"State trials of the Uran-9 UCGV will be completed this year," Ground Forces Commander-in-Chief Army Gen. Oleg Salyukov said in an interview with the Krasnaya Zverda newspaper, as reported by Tass. "Simultaneously, the work to create heavy and medium-class unmanned ground combat vehicles (Shturm and Soratnik) are underway with the aim of creating advanced units of the ground forces."

The 12-ton Uran-9 UCGV was developed as a multi-role remote-controlled combat platform. It is powered by a diesel engine that allows it to accelerate to 22 miles per hour on paved roads and up to 15 mph off-road. It is armored with steel plates that can help protect it from shell splinters as well as small arms but it is still vulnerable to heavier armaments – notably RPGs and even heavy machine guns, as well as IED (improvised explosive devices).

While described as a robot vehicle, is not truly autonomous but is controlled remotely by an operator and commander who can maintain a distance in an armored vehicle that can also help transport the mini-tank. The vehicle can maneuver around obstacles when moving along pre-programmed paths. While some sources have suggested that the Uran-9 may be able to detect, identify and even engage enemy forces without manual human direction, this has been largely unsubstantiated.

Thermal and electro-optical sights and sensors are mounted on top of the turret, and this allows the operator to maintain visuals of the battlefield. This allows the Uran-9 to be used for reconnaissance, fire support and anti-tank missions. It is equipped with a 30-mm 2A42 autocannon, a 7.62-mm machine gun, a Shmel-M rocket-assisted flamethrower and an Ataka anti-tank guided missile launcher.

A Unified Tactical Management system also allows up to four of the Uran-9s to be networked together to share information.

The Uran-9 was deployed to Syria for field testing, but according to reports, the platform was "not able to perform the assigned tasks in the classical types of combat operations." It was suggested that it could be 10 to 15 years before a UCGV would be ready to successfully perform such complex tasks, thus suggesting its autonomous engagement would be limited at best.

However, the Russian military has been doubling down on its efforts to develop autonomous weapons, and this has included an "unmanned" version of its Su-35 jet fighter and its T-14 Armata tank. In August, he T-14's manufacturer UralVagonZavod announced that its research and development specialists were working on a version of the tank that could operate completely without a crew.

Whether it would be more effective than the Uran-9 is unknown, but then again the T-14 had a few issues as well in Syria, when one of the advanced Armata tanks was destroyed while engaging insurgents earlier this year.