Could Taiwan's Small Ships Help It Stop a Chinese Invasion? 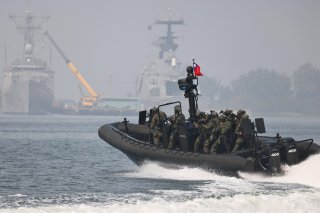 Here's What You Need to Remember: But transforming the Taiwanese navy first requires a cultural change within the fleet’s ranks.

The Taiwanese navy needs to start building small, cheap, missile-armed attack boats, and fast. It’s the only way Taipei can hope to hold off a Chinese invasion force long enough for the United States to intervene on the island country’s behalf.

There was a time, not long ago, when Taiwan with its roughly 20 million people was richer and militarily more powerful than China with its billion people. Taiwan also enjoyed a reliable military alliance with the United States, which as recently as 1996 sailed aircraft carriers through the Taiwan Strait in order to deter authoritarian China from moving against the democratic island neighbor that it considers a breakaway province.

But China’s economic expansion has altered the balance of power. “U.S. presidential administrations and Congress have been stingier and stingier with arms sales over the years, even as China opened itself to the world economically, made itself rich, and sluiced some of its wealth into new weaponry for [People’s Liberation Army] naval, air and missile forces,” Holmes wrote.

“Both assumptions—U.S. support and mainland backwardness—are now suspect,” he continued.

Today, Taiwan’s defenders remain outnumbered, as always, but they can no longer count on technology and human excellence to make up for relatively sparse numbers of ships, planes, and tanks.

The PLA is good and getting better, while its advantage in sheer mass will last into the indefinite future. The geopolitical advantage goes to the well-armed continental power overshadowing the winsome island lying just offshore.

What the Taiwanese navy could do was deny the PLA Navy command of seaways adjoining the island. Such sea denial is a classic strategy of the weak who entertain limited aims. No maritime command for China, no amphibious assault.

A mortal threat would remain at bay, either because Beijing concluded such an assault offered sparse prospects of success and foreswore the attempt, or because the Taiwanese navy, fighting in concert with ... forces ashore, delayed the onslaught long enough for U.S. forces to arrive on station to help repulse the assailants.

But apparently only a dozen of these fleet-of-foot streetfighters will be constructed. That’s hardly a swarm capable of deterring or delaying a Chinese onslaught for long. The [Taiwanese] navy needs many more hulls.

But transforming the Taiwanese navy first requires a cultural change within the fleet’s ranks. That might come too late, it comes at all. “It took Pearl Harbor to break the U.S. Navy’s culture of battleship operations, showing that aircraft carriers were now the premier weapon for war at sea,” Holmes pointed out.

Taiwan doesn’t have the option of suffering a major defeat as a learning experience. It must buck the trend, amending its naval culture before a cross-strait war—a war potentially fatal to national existence—breaks out.

Embarking on a new course is a matter of urgency. An island populated by 23 million people has only so much to spend on national defense. It cannot afford to waste resources on expensive legacy capabilities while procuring new capabilities in bulk.

Leaders in Taipei, accordingly, may be better off redirecting scarce budgetary resources toward porcupine or sea denial platforms and away from pricey and glitzy purchases such as F-16 fighters or domestically-built submarines—to name two traditional programs that command substantial support on the island.

Strategy is about setting and enforcing priorities. The same can be said of designing and forging the implements used to execute strategy. If Taipei goes all in on the weapons of the weak, that’s where it should direct resources—lest it try to procure every bit of hardware to carry out every possible military mission and end up ill-equipped to conduct any of them.

David Axe served as Defense Editor of the National Interest. He is the author of the graphic novels War Fix, War Is Boring and Machete Squad. This article first appeared earlier and is being reposted due to reader interest.