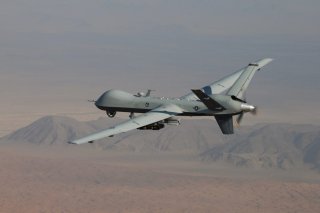 Here's What to Remember: The Reaper technology, identified as the Reaper Defense Electronic Support System (RDESS), is described as having successfully tested an anti-jam, anti-spoofing application that can utilize new aircraft antennas to make essential assessments.

The Air Force is arming its MQ-9 Reaper drone with new technologies to “counter” enemy countermeasures by enabling its sensors, electronics, and weapons to sustain functionality even in the event that an enemy attempts to hack, “jam” or disrupt its systems.

It’s called a “hardened targeting pod,” a technology with what an Air Force report calls an “electro-optical counter-countermeasure.”  While many of the technical parameters central to the technology were not mentioned in the Air Force report, likely for security reasons, it was identified as a system that gives the MQ-9 Reaper an ability to find and detect threats in order to thwart jamming attempts or enemy electronic warfare (EW) attacks.

The Reaper technology, identified as the Reaper Defense Electronic Support System (RDESS), is described as having successfully tested an anti-jam, anti-spoofing application that can utilize new aircraft antennas to make essential assessments.  The Air Force report also said the new RDESS supports the Defense Department’s Joint Artificial Intelligence Center, something which could suggest the new target hardening pod draws upon AI-enabled computer technology.  It would not be at all surprising if AI-enabled algorithms were used to help discern, organize and even deconflict parts of the spectrum to ascertain where the threats are and, if needed, recommend adjustments to protect against jamming.

One of the ways the Air Force is countering enemy countermeasures is by engineering Radio Frequency (RF) technologies capable of frequency hopping for weapons guidance systems. For example, should an enemy EW attack seek to jam the RF or infrared targeting guidance on an air-to-air weapon, targeting adaptations can switch or “hop” from one frequency to another to ensure continued guidance functionality. The Reaper has even been armed with AIM-9X air-to-air weapons, a development that allows for a greater range of air warfare engagement possibilities.

This kind of anti-jamming technology, which was demonstrated at the Air Force’s recent Northern Edge wargame in Alaska, could be extremely significant to a platform such as the Reaper, which the Air Force continues to transition into a great power warfare environment. The Air Force has given the Reaper new fuel tanks, weapons, sensing technology, and now, “target pod hardening” to enable the armed platform to add value to an air war effort against an extremely sophisticated adversary with advanced technologies.

The new “hardening pod” can, along with other technical adaptations, enable the Air Force with the ability to improve survivability for the Reaper, a larger, less stealthy platform. The conceptual effort intended to make the Reaper survivable in a great power war also involves tactical adaptations, according to Air Force Europe Commander Gen. Jeffrey Harrigian told The Mitchell Institute that  Reaper flight paths can become more varied and less “predictable” to an enemy, as a way to diminish the possibility of being shot down.