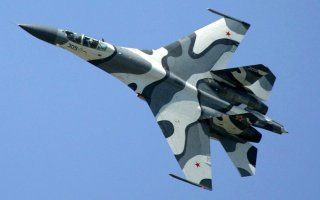 Here's What You Need to Know: Interceptions are exceedingly common in the Baltic region, though some are more tense than others.

In an illustration of ongoing Russia-NATO military tensions over Baltic airspace, footage released in 2019 shows a Russian Su-27 fighter making a sharp turn into an American F-15C.

#BREAKING: A #Russian Air Force pilot has released this video showing how a #RuAF Su-27P (from 72nd Guards AvB) dangerously banked in front of a #USAF's F-15C of 493rd Fighter Squadron while it was patrolling over #Baltic Sea as a part of #NATO Baltic Air-policing mission. pic.twitter.com/zVU5dN4rpe

It is unclear when the video was filmed, with some speculating that it occurred during a prior NATO BAP (Baltic Air Policing) mission. When viewed in that light, this incident seems to fall into the trend of what US officials have previously described as “unsafe” Russian interceptions and “aggressive maneuvers” in high-tension airspace.

The Russian account is not implausible, given that Kremlin officials frequently fly to and from Kaliningrad-- a Russian enclave in Europe nestled between several NATO countries--  over Baltic airspace. For instance, a similar altercation between an Su-27 and F-16 occurred in June 2017 while Russian Defense Minister Sergei Shoigu was en route to Kaliningrad onboard a Tu-154 airliner.