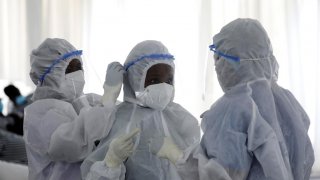 The COVID-19 pandemic has placed another stumbling block in the way of the Drug Enforcement Administration’s futile effort to reduce the country’s drug overdose rate through quotas on the manufacture of all forms of prescription opioids.

The DEA’s annual quotas have brought production levels more than 50 percent below 2016 levels. But, in response to the COVID-19 pandemic, the agency increased this year’s quota by 15 percent, to allow drug makers to respond to pandemic‐​induced shortages. Intravenous opioids such as fentanyl are valuable tools used to manage patients on ventilators—as well as inducing general anesthesia—and the DEA recognized the pandemic would likely increase demand for such drugs. Unfortunately, the agency conflates prescription opioid pills used in the non‐​hospital setting with intravenous opioids like fentanyl and morphine, almost exclusively used in hospitals, when it adjusted the manufacturing limits.

This has generated a shortage of intravenous opioids, causing many hospitals to cancel or delay necessary procedures and has jeopardized the management of patients on ventilators, according to a July 22 report from the hospital policy group Premier.

This is not the first time that DEA opioid production quotas caused a critical shortage in hospitals. I wrote here about the shortage the agency helped create in 2018.

While hospitals and patients suffer from the DEA’s war on opioids, fentanyl and other IV opioids are plentiful on the street. We learned last week in a preliminary report by the Centers for Disease Control and prevention that drug overdose deaths increased from 67,367 in 2018 to 70,980 in 2019. And deaths attributable to fentanyl increased by 15 percent, from 31,529 in 2018 to 36,509 in 2019.

Policymakers continue to believe that reducing the prescribing of opioids will somehow lead to a reduction in their non‐​medical use, addiction, and overdose deaths. This false hope persists despite the fact that data from the CDC and the National Survey on Drug Use and Health show no association between prescription volume and non‐​medical opioid use or addiction.

This article by Jeffrey A. Singer first appeared in CATO on July 24, 2020.