Did a CIA Drone Take Out an Iranian F-14 Tomcat? 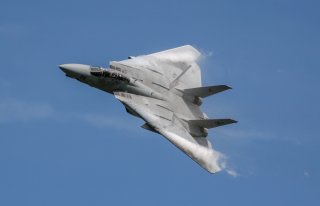 Here's What You Need to Know: And in 2012 one of the alleged flying robots reportedly also shot down an F-14 attempting to intercept it. Or at least some Iranians seem genuinely to believe so.

“In several cases … F-14s faced them but were unable to operate their armament systems properly,” Taghvaee wrote. One Tomcat taking off to intercept a luminous object on Jan. 26, 2012, mysteriously exploded, killing both crewmen. Taghvaee implies the alleged UAV was somehow responsible, as the F-14 in question was “one of the fittest” of the 40 or so Tomcats then in service.

In 2009, the Air Force copped to the existence of a new, previously secret drone operated in conjunction with the intelligence agency. The RQ-170 Sentinel was based in southern Afghanistan within a short flying distance of Iran. In December 2011, a Sentinel crashed on the Afghanistan-Iran border and was captured by Iranian troops.

So if Iranian F-14s truly are chasing around super-fast, super-high-flying, and lethal UFOs, what exactly are they? Who knows.