Did Iran Really Scare American Drones Away from the Persian Gulf? 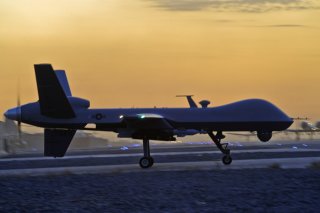 Here's What You Need to Remember: Iran has been accused of orchestrating various recent attacks on shipping in the sea lanes serving the Gulf, which is where a large portion of the world’s oil is produced.

Iranian state media claimed on Tuesday that the Iran military had “warned off” U.S. drones that were operating near an annual exercise at the mouth of the Persian Gulf. The annual Zulfiqar 1400 exercises began on Sunday, east of the Strait of Hormuz, and extended over an area of more than a million square kilometers (around 400,000 square miles) in the Sea of Oman, the Indian Ocean and even into parts of the Red Sea. The war games concluded on Tuesday with a parade of warships that included Iranian submarines.

Exactly where the drones were when they were “warned off” hasn’t been entirely established, but the types of unmanned aerial vehicles were noted in a state TV report.

“These aircraft [RQ-4 and MQ-9 U.S. drones] changed their route after approaching the borders of the Islamic Republic of Iran following the air defence’s interception and decisive warning,” state media IRIB reported, according to Reuters.

The RQ-4 Global Hawk is a high-altitude, remotely piloted, surveillance aircraft that first entered service in 1998. The unmanned aircraft can provide a broad overview and systematic surveillance using its high-resolution synthetic aperture radar (SAR) and electro-optical/infrared sensors, while it can maintain long loiter times over target areas. As such, the RQ-4 Global Hawk can survey as much as forty thousand square miles one hundred square kilometers of terrain per day, roughly area the size of South Korea or Iceland. Meanwhile, MQ-9 Reaper—also known as the Predator B—UAV is capable of remote control as well as autonomous flight operations. It is a hunter-killer UAV designed for long-endurance, high-altitude surveillance. It first entered service in 2007.

Iran has been accused of orchestrating various recent attacks on shipping in the sea lanes serving the Gulf, which is where a large portion of the world’s oil is produced.

This latest incident between Tehran and Washington comes just weeks before the two countries are set to resume talks to restart the 2015 Joint Comprehensive Plan of Action nuclear deal. That would be the first talks regarding the United States’ re-entry into the nuclear deal that former President Donald Trump exited from in 2018.

Six previous rounds of indirect negotiations had occurred earlier this year and ended in June when the Islamic Republic elected a new president. It is unlikely that the U.S. strategy will change in the next round of talks.

“We have been unambiguous when it comes to our position that there was tremendous progress in rounds one through six in these talks in Vienna,” State Department spokesperson Ned Price said in a statement, reported by TheHill.com. “It would be neither productive nor wise to take up from any other position from where we left off in June, from the conclusion in the sixth round.”

The next round of talks is set to resume in Vienna on November 29.