The U.S. Military's Eye in the Sky: Why the Global Hawk Is a Powerful Asset 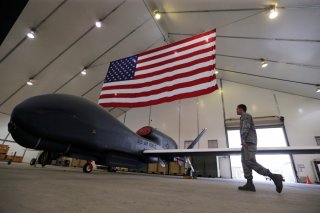 The Air Force and Northrop Grumman are modernizing the RQ-4 Global Hawk with a new ground control station; the new ground station command and control system is intended to pioneer new methods of reducing latency, speeding up attacks, providing a foundation for software upgrades to improve sensing and image resolution and also enabling artificial-intelligence-empowered man-machine interface. Tactically speaking, part of this pertains to accelerating what Northrop developers describe as ad hoc tasking wherein new, fast-arriving intelligence information might lead to mission adjustments. Much of this is enabled by increased autonomy and an ability to quickly gather, process, analyze and transmit massive volumes of information in milliseconds by bouncing new data off of a vast database to draw comparisons, perform analyses, solve problems and identify moments of greatest relevance, without needing human intervention. The new control system for the unmanned aircraft also incorporates new cockpit displays and emerging cyber-hardening technologies.

The Global Hawk circles above hostile terrain searching for enemy targets for up to forty hours on a single mission, zooming in high fidelity, long-range sensors able to monitor the training, force positioning and weapons activities of potential adversaries. Perhaps of greatest significance, the Global Hawk finds and transmits time-sensitive crucial targeting details, a long-standing technical capability perhaps at least in part explaining why the Air Force is putting more money into upgrading and sustaining its current fleet. These types of upgrades might be an indicator of how the Air Force is looking to a future with the Global Hawk: through enhancements while retiring older variants. This could free up efforts to further innovate and complete the ongoing transformation of the Global Hawk into a combat platform well-suited for high-threat, major warfare against a technologically advanced adversary.

Global Hawks, Northrop developers say, have flown as many as three hundred thousand operational hours over the last twenty years and will be able to fly and operate well into the 2040s and beyond. The average age of the Global Hawk is eight years old. Northrop developers have told the National Interest that the unmanned aircraft’s composite and metallic materials help enable the unmanned aircraft to fly for tens of thousands of operational hours.

The rationale behind upgrading and transitioning the Global Hawk for great-power warfare is based upon the extent to which technological adjustments can enable a not-quite stealthy medium-size unmanned aircraft to bring unique and unparalleled advantages and survivability to a “contested” or high-threat warfare scenario.

While a larger platform, its high-altitude mission ability, coupled with long-range sensor apertures enable it to conduct high-risk missions in areas where low-altitude unmanned aircraft might be vulnerable to destruction from enemy air defenses or electronic warfare. Sensor technology is also changing at what could be called a staggering rate, meaning smaller and smaller hardware systems are increasingly able to massively improve image resolution and greatly extend detection and sensing ranges. The Global Hawk has also provided the technical infrastructure to the now operational maritime variant of the unmanned aircraft, called the MQ-4C Triton. Being configured with specially configured maritime sensors and an ability to change altitude in icy or adverse weather conditions, the Triton is intended to align with and complements Global Hawk surveillance technologies.