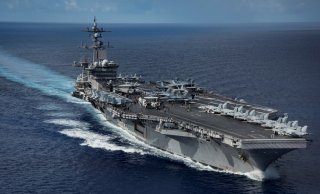 What was not long ago a high-priority push to build a complex Navy fleet up to five hundred manned and unmanned vessels in coming years, appears to be disintegrating beneath the reality of the current budget proposal, which reduces shipbuilding and service technology funding well below what was expected.

“China increased defense spending sevenfold in ten years. If you ask the leaders of the Navy, ‘Do we need more ships or fewer ships?’ They will tell you, ‘The Navy needs more ships. We cannot prevent war with these figures. We cannot defend our nation,’” Sen. Dan Sullivan (R-Alaska), the ranking member of the Subcommittee on Readiness, told a group of reporters during a press availability for Senate Republicans to address what they see as a pressing, urgent security concern regarding the budget

Several prominent Republicans, taking to the airwaves to express their opposition to the current administration’s budget proposal, are of the view that a bipartisan goal of 355 ships may even be in jeopardy given the proposed levels of Navy funding.

“We do not want to have a shrinking Navy fleet,” Sullivan said. “There was a bi-partisan law on a 355 ship Navy. This budget actually starts to shrink the size of the U.S. Navy. It is going in the wrong direction.”

Sullivan and several of his Republican colleagues were quite specific about their reasons why a smaller fleet is entirely insufficient, if not extremely dangerous.

Several congressional and Pentagon assessments have said that given China’s pace of shipbuilding, the People Liberation Army Navy is likely to reach five hundred ships itself before the end of the decade if not before. The Chinese have more ships than the United States at the moment, and the gap is expected to widen considerably in the coming years unless more money is allocated for shipbuilding.

“We need to keep an eye on terrorism but great-power competition has been the pacing threat,” Sullivan said. “This budget shrinks the Navy fleet and nobody thinks that is sustainable in terms of our competition with China. What we need to do is appropriate funding. We should exercise the ability, on a bipartisan basis, to reverse this.”

Advocates for the current budget continue to be somewhat quiet on the subject of funding a large Navy fleet, apart from mentioning fiscal constraints and a general belief that the budget is adequate, sufficient, or appropriate to current global circumstances. Faced with a similar debate, the Obama administration routinely maintained that technological superiority, mission versatility and multi-domain networking with ship platforms could maintain overmatch against a larger adversary fleet size. While, of course, advocates for a larger Navy wish for both size and technological superiority, there is an interesting debate about whether more dispersed, yet securely networked maritime platforms can successfully accomplish an increasingly complex and challenging set of missions. Critics of the current budget maintain that simply is not and would not be the case. They note that not only is the U.S. margin of technological superiority regarding China shrinking, but that even technologically advanced ships armed with long-range precision networking will still be crucially needed in large numbers to succeed against a large Chinese Navy.