Why Republicans are Preparing to Embrace a Bad Defense Budget 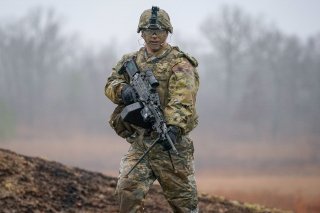 As many lawmakers, weapons developers and patriotic observers seek to digest, interpret, analyze and understand the rationale for the 2022 defense budget proposal, some prominent members of Congress are stepping forward to raise questions about why the Biden administration has proposed only 1.6-percent growth in spending for defense,

“When you have the experts studying this, they think that given the national security challenges, there should be three to five percent growth. This is a 6 trillion dollar budget. They are increasing spending on everything, except on this. It is not hard choices, it is what you emphasize. Three to five percent annually is a bi-partisan consensus,” Sen. Dan Sullivan (R-Alaska), ranking member of the Subcommittee on Readiness, told reporters at a gathering of Republican Senators.

The frustrations among those advocating for greater defense spending are compounded by what critics call a massive disparity given that the budget proposal for the remaining federal agencies is slated at 16-to-20 percent growth.

“We are going to fall behind the pacing threat we face in China,” Sen. Rick Scott, (R-Fla.), told reporters.

Republican lawmakers say 1.6-percent growth is actually a “cut” when inflation is considered. They maintain that their view is shared by many pro-military, center-leaning Democrats and non-partisan military leaders.

“A National Defense Commission came to the Congress in 2018 and proposed a three to five percent increase every year. That was the bipartisan agreement, and there were a bunch of Biden administration nominees who were on that commission that were pushing for this,” Sullivan said.

During the discussion among the Republican advocates for a much larger budget, the reality of a fast-growing threat from an increasingly expansionist Chinese military was a focus of much attention.

“China is increasing its defense budget by 10 percent per year, and defense spending was cut by 25 percent during the second Obama administration,” Sullivan said. “You can’t keep whipsawing the military as it equates to readiness. The readiness of our forces was at some of the lowest levels we have seen in decades.”

The Republican leaders argued that the massive decrease in defense spending, which they said the Biden administration calls “adequate,” may reflect the emergence of political differences within the Democratic party. Certainly, many Democrats have a long history of advocating for robust defense spending, however, that sensibility does appear to be noticeably absent from this 2022 budget.

“The far left is ascendent. The original budget proposal was a 10-percent cut,” Sullivan said. He was referring to what some people see as “tensions between far left and moderate Democratic Senators who are pro-defense.”

Sullivan also echoed remarks from other members of the group of congressional Republicans who said that, throughout the course of their conversations with colleagues and military personnel, that many center-leaning Democrats and U.S. military leaders are also very disappointed with the proposed budget. He added that this may be particularly true in states with a very heavy military presence such as Arizona and Virginia, among others. Arizona is home to Yuma Proving Grounds, a location of massive importance for military testing and weapons modernization and of course aircraft carriers are built in Virginia.

“The admirals and generals don’t like this budget,” Sullivan added. “There are a number of Senate democrats who don’t like that we are not prioritizing defense in this budget. There is no way this military can look at us and say we prioritize our military relative to other parts of the budget.”