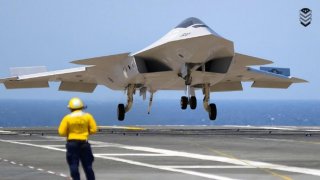 The Air Force is asking for $1.5 billion in 2022 to support its already airborne Next Generation Air Dominance 6th-generation stealth fighter jet program, a massive jump from last year which indicates growing enthusiasm and ambitious plans for the new platform.

While little to no details about the aircraft are likely to be available for security reasons, the budget increase of $623 million over last year might offer a window into the program. If the aircraft is already flying, and there are already fast-arriving budget increases in a budget year where they are tough to come by, there may be reason to surmise that the service has extremely ambitious plans for the aircraft. Much can be learned from initial demonstrator flights, which may be solidifying key conceptions about how new technological paradigms can inform stealth fighter attack.

It would not be at all surprising if more demonstrators were built and flown in the near future, and perhaps the program may even engineer more than one variant or several airframe options. Air Force Chief of Staff Gen. Charles Brown has already indicated there may be two variants of the aircraft: a larger Next-Generation Air Dominance (NGAD) for the Pacific able to carry more fuel, extend ranges and improve endurance across the maritime expanse; and a smaller and potentially more maneuverable European variant not facing the same geographical barriers known to exist in the Pacific theater.

Perhaps some of the initial thinking is centered around the possibility that a 6th-Generation fleet could be quite large, something which might indicate that weapons developers and futurists want to avoid the mistake that was made years ago when the F-22 Raptor program was abruptly cut. The concept is likely based upon the anticipation that the Air Force will need a fighter jet capable of flying well into the 2080s and beyond.

Concepts related to the 6th-generation aircraft bring some interesting possibilities to mind. What if a single aircraft were able to operate with speed, maneuverability, and air-supremacy capability superior to an F-22, while also incorporating a suite of AI-enabled sensors, Intelligence, Surveillance, and Reconnaissance (ISR) capability and advanced computing superior to an F-35?  Not only could it combine or integrate the best attributes of each of these 5th-Generation aircraft, but perhaps it could bring new breakthrough levels of performance able to greatly exceed 5th-generation capability. Most of all, the largest developmental priority for 6th-generation engineers is likely related to making something upgradeable. The aim is most likely related to architecting a technical infrastructure such that the aircraft can quickly accommodate new weapons, sensors, and performance-enhancing software upgrades.