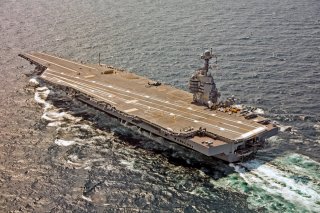 With bombs now exploding in the ocean near the Navy’s USS Ford during initial shock trials to test its combat readiness, Navy leaders say the first-in-class ship is “on track” to deploy in 2022.

Subject to final progress with some ongoing improvements, modifications and adjustments to the elevators and catapults on the ship, the USS Ford will set sail for combat.

“Right now we’ve accepted seven of eleven elevators. I expect that we’ll accept two by early fall, and the remaining two by the end of the year. After the shock trials, the ship will go into a maintenance availability. We'll finish up those last two elevators, and then we'll get her out to deploy in ’22,” Adm. Michael Gilday, the chief of naval operations, told the Senate Armed Services Committee.

Such a development, should it come to fruition, would indeed be historic as it will begin a new era in maritime warfare for the U.S. Navy. The deployment of the USS Ford will also be a welcome event for many Navy weapons developers, industry builders and Congressional supporters who have witnessed years of challenges throughout the years of the ship’s developmental trajectory.

The first of three “shock-trials” wherein bombs are exploded in close proximity to the ship to test its combat durability, has already taken place and two more are expected in coming months, Gilday explained.

Shock trials arrived after the ship closed out a successful eighteen-month Post Delivery Test & Trials period in April, during which the crew completed all required testing, performed maintenance work and solidified a few upgrades.

“Later this summer, Ford will enter a Planned Incremental Availability for six months of modernization, maintenance, and repairs prior to its operational employment,” a Navy report on the shock trials said.

Over the years, many lawmakers and even senior Pentagon weapons developers and planners have expressed concerns about the delays, cost overruns and technological problems associated with the USS Ford. Many of these difficulties, Navy developers maintained at the time and still say today, is that the construction of the first-in-class new ship such as the USS Ford represented an ambitious and substantial technical leap forward by integrating so many breakthrough technologies onto a single platform. This circumstance led to a need for one-time “non-recurring” engineering costs associated with building a first-in-class ship.  The USS Ford does bring new electronic weapons elevators, an electromagnetic catapult, a much larger flight deck to increase sortie rate and a breakthrough amount of computer automation intended to streamline technical functionality and automate procedural functions. This enables the USS Ford to operate with nearly one thousand fewer crew members, a fact which Navy developers years ago said will save $4 billion per ship over the service life of the carrier. The ship is also getting a mini-drone headquarters along with new computing, sensors and layered defense technologies.