Germany and America Team Up to Build a New U.S. Army Armored Vehicle 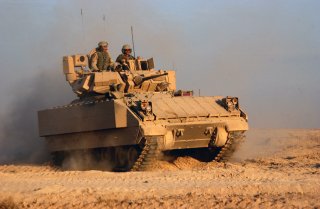 As the Army’s Optionally Manned Fighting Vehicle competition heats up moving into the next phase, the service is reviewing a number of industry proposals prior to making a decision about which armored combat vehicle builders should be given deals to build prototypes.

While the Army does not announce the competitors, the field naturally includes some of the largest and most well known weapons developers. One team is comprised of an interesting industry conglomerate looking to synergize the best in German armored vehicle engineering

Fighting Vehicle. Led by Rheinmetall, the “Lynx” team is building a distinct U.S. “variant” intended to align specifically with U.S. Army requirements. While based upon Rheinmetall expertise, the vehicle will incorporate major U.S. industry participation and emerge as an entirely new “U.S. variant” of the Lynx. The Rheinmetall team includes Raytheon, Textron, L3Harris and Allison Transmission.

Building on Rheinmetall’s manufacturing experience, Team Lynx will manufacture the Optionally Manned Fighting Vehicle (OMFV) structure. It will assemble and test the U.S. Army’s OMFV at the Textron Systems manufacturing facility in Louisiana.

“Our land vehicle production facility in Louisiana, where we have about 158,000 square feet of total manufacturing space with an additional 30,000 square feet of onsite warehousing, has been used to manufacture over 10,000 vehicles,” Clark Lindner, the director of Global Military Sales, Strategy, Textron Systems, told the National Interest. “The facility includes end-to-end vehicle testing tailored to meet program requirements.”

Textron Systems is known for producing the operational Armored Security Vehicle for the U.S. Army. Its developers say they are also drawing heavily upon their experience in engineering and manufacturing unmanned aerial systems such as the Shadow® for the U.S. Army and, more recently, their participation in the RCV Medium program. Naturally, the RCV Medium program is heavily focused upon autonomy and manned-unmanned coordination, something likely to figure prominently in the developmental process.

“We have a large presence in Indiana and the partnership with Team Lynx represents a new product development opportunity that takes advantage of Allison’s considerable manufacturing capability and technical expertise,” Dane Rodgers, the director of New Product Development, Allison Transmission, told the National Interest.

The Lynx will be equipped with Allison’s Next-Generation Electrified Transmission to provide the benefits of reduced detection by the enemy and increased soldier survivability.

“We are not only anticipating new product development opportunities, but we’re talking about a transformation of a workforce that becomes far more digital and allows for faster cycles Integrating new capabilities onto the vehicle so they can stay competitive against threats,” Rodgers added.

The Lynx team has emphasized the need to engineer a vehicle suited for the immediate need of the warfighter and also to optimize the vehicle’s design configuration, sensing, weapons performance, and computing technologies to be ready to respond to future threats. The concept, all participants say, is to engineer a vehicle that is ready and easily adaptable for necessary growth with the knowledge that major power adversaries will be moving quickly to try to outpace the United States, and Lynx must be able to keep up, developers say.

In carrying out this developmental work, Rheinmetall developers say that they will naturally draw upon and evolve their substantial experience in building armored combat vehicles, such as tanks and infantry carriers. Mike Milner, the director of business development and strategy for American Rheinmetall Vehicles, said. “The U.S. Lynx will draw upon some of the most recent innovations and combat vehicle developments in Europe and combine that experience with considerable U.S. expertise.”

There are many facets, plans, and technical nuances to the Lynx team’s industrial approach, including U.S. production and technology development. The project will entail the introduction of a vast number of new U.S. engineering, science and manufacturing jobs, as well as a decided developmental emphasis upon bringing new opportunities in modeling, simulation and digital engineering.

Rheinmetall is also looking at other U.S. production expansion opportunities as part of the OMFV program. “As we continue throughout the program, and different contracts are awarded, this does allow us the opportunity to expand the supply base into other areas and additional locations within the U.S., very similar to what we have successfully implemented in Australia and Hungary,” Milner said.

Overall, the large team of industry players seeks to engineer a vehicle in alignment with Army requirements, expand into new modernized U.S.- based manufacturing facilities to create new jobs, and build a vehicle of unique value to the Army. An extraordinary effort is likely needed, given that the OMFV is drawing a large number of industry competitors.