Why the Air Force Cares About Where Its Missiles Reside 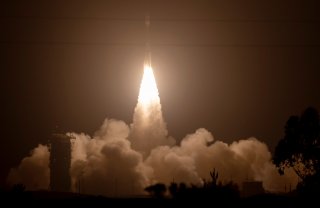 The Air Force is already finding locations for its now underway new Ground-Based Strategic Deterrent (GBSD) intercontinental ballistic missile (ICBM), following news that both Hill Air Force Base in Utah and Vandenberg Air Force Base in California are potential housing sites for the weapon. The bases recently passed environmental assessments.

A final environmental assessment determined that having the GBSD at those locations would have “no significant impact upon cultural or natural resources,” an Air Force TV report said. The report also cleared an Atol area in the Pacific region as a location for test demonstrations for both the GBSD and Minuteman III.

Citing ongoing work with the GBSD, the Air Force report said service engineers and weapons developers were working to modernize the land-based leg of the nuclear Triad, work on command and control upgrades, improve weapons systems and supporting infrastructure.

Dispersing ICBMs in this fashion, should they ultimately be based in Utah and California, might offer slightly different levels of reach or angles of approach. New launch trajectory options introduce a few interesting tactical possibilities, as the current arsenal of ICBMs is spread out across a vast expanse of three states spanning North Dakota, Wyoming and Montana. Having them spread across a wide swath of terrain makes them less likely to be destroyed quickly or in rapid succession in the event of some kind of attack. Of course, land-fired ICBMs can travel through space to just about anywhere on earth regardless, having one able to fire from the California coast could prove to be strategically useful. It might position a U.S. nuclear response contingency along the border with the Pacific ocean and therefore be in a better position to both use sensors and warning radar to detect incoming threats from Asia or launch attacks in the direction of China.

In the case of Vandenberg Air Force Base, it seems significant that the Pentagon might place offensive ICBMs in the same location as it currently has its Ground-Based Interceptors. Vandenberg is a crucial location for missile defense as it offers an opportunity to synergize both offensive and defensive missile strategies and tactics. Perhaps an incoming threat is detected by networked command and control flying across the Pacific Ocean, an Interceptor missile at Vandenberg Air Force Base could be launched immediately while simultaneously being supported by an offensive counterattack.

Time to target is also important, meaning the length of time it will take an ICBM to travel through space during the mid-course phase before descending upon its target. Simply put, a California-based ICBM would reach China or key targets in the Pacific region much faster than a North Dakota-launched weapon. Typically, ICBMs travel so fast they can often complete the entire mid-course space-flight phase of its trajectory in about twenty minutes. A closer ICBM naturally takes less time, so it stands to reason that California-based ICBMs can strengthen deterrence against China, a strategy growing in importance given the extent to which China is known to be moving quickly on plans to double the size of its overall nuclear arsenal within just ten years.