Budget Boondogle: Can America Learn from Its Korean War Mistakes? 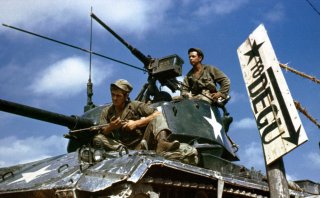 The seventy-fifth anniversary of the start of the Korean War and the casualties and suffering that followed, can serve as a grim reminder of the perils and traumas unique to the horrors of war. As of June 25, 2021, North Korea and South Korea are still divided. The damage done by that war is all too often overlooked or overshadowed by memories of World War II and Vietnam.

Tragedies and losses in the Korean War, a conflict which took at least forty thousand U.S. lives, was to a large extent exacerbated, if not caused, by a simple lack of readiness, according to a group of Republican Senators who gathered to express frustration with the Biden administration’s 2022 Defense budget.

Senate Armed Services Committee Republicans who gathered to express a collective sense of urgency regarding the national security implications of the proposed budget, drew attention to what they referred to as glaring disparities between the defense budget proposal and the large, across the board increases proposed for all other federal agencies in the budget submission. The lawmakers argued that the budget submission numbers show that, with a 1.6 percent proposed increase, the defense budget request last among federal agencies, which are all increased by an average of 16-to-20 percent.

Sen. Dan Sullivan (R-Alaska), ranking member of the Senate Armed Services Subcommittee on Readiness, made several references to U.S. casualties suffered during the Korean War in the 1950s, making the argument that the military was significantly under-resourced at the time, and therefore simply not ready for conflict. It is a scenario which, in the view of Sullivan and his Republican colleagues, could easily recur if there are not major changes to the proposed defense budget.

“Summer of 1950, thousands of our forces died. Forces that died in Korea were not ready. We are here to call on the president to prioritize national security. We are also calling upon pro-defense democratic senators to fight for our budget,”  Sullivan said.

Building upon this historical example, Sullivan invoked the often discussed philosophical paradox fundamental to deterrence, which is the idea that building and sustaining a massively superior and prepared military in order to keep the peace and essentially decrease the possibility of war.

“The military will not be ready with this budget,” Sullivan said. “We are going to propose a resolution to urge the Biden administration to work with us and make sure this country can defend our freedoms. Spending is needed to keep us out of war by making us so strong and so resilient that nobody will think of challenging us in a kinetic way,. Russia has not retreated. China hasn’t retreated. This budget represents a recommendation that we retreat. I think we can have bi partisanship on this.”

Sen. Joni Ernst, (R-Iowa), who served in Operation Iraqi Freedom with the Army National Guard, expressed strong concern that the proposed budget would leave the United States very vulnerable by cutting the Army by as much as $3 billion.

“This budget doubles the size of the IRS and slashes the Army budget by $3 billion. This will leave us with the same size military we had on 9/11. We will be less ready with older equipment,” Ernst said.

“Folks engaged in Korea were not manned,” Ernst said. “They were not equipped. What Biden’s budget is doing is preparing us for a time when we are not manned or equipped.”