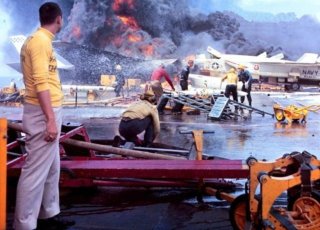 Here's What You Need to Remember: USS Forrestal had been the U.S. Navy's first "supercarrier" and was the largest ever built when she was commissioned in 1955.

As of Tuesday evening, the U.S. Navy announced that it had made "significant progress" toward putting out the fire on the USS Bonhomme Richard (LHD-6), a Wasp-class amphibious assault ship. While it is still too early to tell the exact cause of the fire or whether the warship will be able to be repaired, what is remarkable is that there has been no loss of life.

The same could not be said of the fire that broke out on the USS Forrestal (CV-59) in July 1967, in which 134 were killed and another 161 injured. It was also, sadly, not an isolated incident.

As The National Interest previously reported, in the 1960s, the Navy had suffered a series of deadly accidents aboard its carries. Many of the incidents came about due to the inherent dangers of operating ships that were packed full of explosive munitions, jet fuel and aircraft. Thankfully, the accidents resulted in major reforms that better handled how the crews operated and how they responded to such a crisis in the future. But, of course, these changes were little comfort to the families of those killed.

USS Forrestal had been the U.S. Navy's first "supercarrier" and was the largest ever built when she was commissioned in 1955. The carrier would also suffer the largest fire on a U.S. warship since World War II.

The fire aboard USS Forrestal also occurred just nine months after a devastating fire broke out on the USS Oriskany, which resulted in the loss of forty-four sailors and pilots. The cause of the fire was tragically simple; a mishandled flare triggered rockets stored in an ammunition locker.

In the case of the fire on the Forrestal, it began with the accidental launch of a rocket while the carrier was stationed off the coast of North Vietnam conducting combat operations. On the morning of July 29, the warship was preparing to launch its fighters when a rocket from an F-4 Phantom jet was accidentally launched and hit a parked A-4 Skyhawk jet waiting to take off.

Fuel from McCain's Skyhawk spilled out and caught fire, which spread quickly to nearby planes on the ship's flight deck and detonated a 1,000-pound bomb. That explosion tragically killed many of the initial firefighters and further allowed the fire to grow—until a chain of explosions blew holes in the flight deck.

Pilots were trapped in their planes, and sailors had to manually jettison the numerous 250 and 500-pound bombs by literally rolling them along the deck and over the side. In addition, many sailors who had little-to-no firefighting and damage control training took over from those killed in the explosions—however, inexperienced hose teams also used saltwater, which washed away other efforts to douse the flames with foam.

In the end, it took a full day before the fire on Forrestal was fully contained. It was the worst loss of life on a U.S Navy ship since the Second World War. In addition to the 134 sailors and airmen who were killed, twenty planes were destroyed.

The ship underwent temporary repairs at Subic Bay in the Philippines and then headed back to Norfolk. While it was fully repaired by the following April, the ship never returned to Vietnam. The disaster also prompted the Navy to revise and improve its fire fighting practices, and also to modify the procedures for handling weapons.

Forrestal, which informally known as the "USS Zippo" and "Forest Fire" after being repaired, remained in service until 1993. While the ship was made available to become a museum ship, those attempts were unsuccessful, and she was scrapped in Brownsville, Texas in 2014.

John McCain survived the fire, volunteered for duty on the USS Oriskany, and was shot down just three months later and was taken prisoner by the North Vietnamese. He was not released until five and a half years later.