Does America Have Enough Access in the Western Pacific? 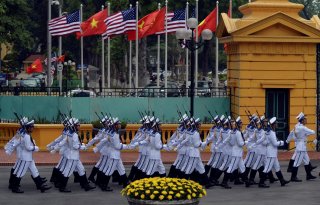 “Having therefore no foreign establishments, either colonial or military, the ships of war of the United States, in war, will be like land birds, unable to fly far from their own shores. To provide resting places for them, where they can coal and repair, would be one of the first duties of a government proposing to itself the development of the power of the nation at sea.”–Alfred Thayer Mahan, The Influence of Seapower Upon History, 1660-1783

Since before the completion of the transcontinental railroad, the United States has determined that “American security, economic prosperity, and values would be fundamentally put at risk if a rival hegemonic power dominated the Pacific.” The United States has ensured this end by various ways and means since the defeat of the Spanish Empire in 1898. Given the vast distances between continental North America and the western Pacific littorals, the United States’ ability to project power and influence is necessarily based upon expeditionary maritime capabilities and globe-spanning military infrastructure. The cornerstone of this power projection complex in the western Pacific is forward deployed military forces, which are in turn enabled by the availability of proximate and friendly basing in theater. However, the ability of the United States to sustainably conduct expeditionary operations in the strategic chokepoints and littorals of Asia could crumble in the absence of the allied access it has come to rely on.

Access to the local, dual-use infrastructure the United States enjoys today is the result of years of sustained investment of all elements of American power to align mutually interested states into a network that allows the United States to project power from theirshores. In recent years, these investments have been diffused across a broad number of states, such that the mortar is crumbling under a lack of recapitalization. This critically enabling influence of forward partners is waning as the PRC rapidly expands its influence, turning the political will of forward allies into strategic chokepoints of another sort.

The U.S. is therefore forced to consider whether those locations it relies on to sustain its overseas presence – whether by formal agreement or informal association – would still be available in the event of a military confrontation between the United States and China. How would this sudden loss of access affect how the U.S. fights as a force and projects power into the western Pacific?

While there are many detractors who will lampoon the proposition that the U.S. would ever be deserted by its overseas partners – perhaps citing years of historic partnership and common interest – it is important to ask if the U.S. is willing to bet the farm on this untested and assailable assumption. If not, what must the United States do in order to hedge against the loss of its heretofore unchallenged access to the western Pacific littorals and attendant infrastructure?

The American military presence in the Indo-Pacific largely reflects the vestiges of the Cold War and has its roots in the exigencies of conflicts ranging from World War Two to Vietnam. The United States has military relationships with nearly every country within the First Island Chain, ranging from limited partnerships to full military alliances. U.S. security cooperation plans keep most of those relationships on ever-increasing trajectories of investment, but this may be more a function of inertia than strategic acumen. American joint doctrine makes clear that the creation of access for U.S. forces is one of the three reasons for conducting security cooperation operations. This investment has created an unparalleled network of ports and airfields capable of supporting U.S. expeditionary operations and logistics in unchallenged environments (see Table 1).

*In question after cancellation of U.S.-PHL Visiting Forces Agreement

As the United States and China continue to jostle for position, allies and partners are pulled in separate directions. The long-relied upon American security guarantee is confronted by China’s growing military and economic strength, and geographic proximity. Despite the deep history and genuine bonhomie between the U.S. and its security partners, this confrontation jeopardizes the carefully-laid peacetime network built over decades, which must be carefully regarded as great power competition in the Indo-Pacific continues to intensify.

For those that might decry this argument as alarmist or discounting years of partnership, consider the state of the U.S.-Philippines alliance. Linked by a Mutual Defense Treaty, the two states’ militaries have stood prepared to fight shoulder-to-shoulder for decades. In February of this year, Philippines President Rodrigo Duterte announced his intention to terminate the Visiting Forces Agreement that, in large part, undergirds that same alliance. The U.S. expectation of access, a key planning consideration, evaporated overnight.

Looking back three decades, we see the U.S. military evicted from its Philippine bases in Clark and Subic Bay in a similar vein. President Duterte has been vocal since his election regarding his intention to rebalance Philippines’ foreign relations, with the subtext being a move closer to China. It is easily posited that this decision is largely motivated by the expectation of economic benefit and uncritical security assistance. And this is coming from one of the supposedly closest U.S. allies in Southeast Asia.

What then of the defense partnership with Thailand, where the U.S. has long-relied upon the U-Tapao Royal Thai Navy Airfield to support combat operations, from Vietnam to Afghanistan? Thailand’s military is now led by openly pro-China officers and their branches have recently concluded a number of high-profile purchases of major weapons platforms from China. Should the U.S. and China enter into hostilities, would Thailand offer the use of its strategic airfield with the knowledge that it might be severing ties to the source of its own military equipment? This is, of course, only the military aspect. China is also Thailand’s largest trading partner.

If the depth of U.S investments and shared interests with its closest Southeast Asian allies are crumbling during peacetime, what then does this portend for access with less formally aligned states during open conflict with the PRC? In the face of mounting evidence to the contrary, should the U.S. government continue to rely on the prospect of unfettered access to logistical support and conduct offensive operations, as it has for the past 30 years? Or is it setting up the possibility of the Joint Force having to play a scratch game as its forward elements are ejected by non-belligerents at the outset of a conflict?

All Dressed Up with Nowhere to Go

Spanning from critical repair and replenishment functions to overflight permissions and divert airfields, the premise of access in nations such as Singapore, the Philippines, Thailand, Japan, Korea, and elsewhere is crucial to American operational plans. This loss will reduce the force generation capacity in theater, constrict avenues of approach, constrain operational flexibility, render the forward logistics chain brittle, and introduce friction into the crucial opening hours of a conflict as American forces potentially scramble to adjust to a new, unpracticed reality.

One of the first and most likely casualties to a restriction on access is the loss of crucial airfields. These airfields enable everything from air dominance operations and anti-submarine warfare, to battlefield awareness and transportation of personnel and material. While their loss does not mean that the United States and coalition partners will be unable to conduct air operations within the First Island Chain, both the number of sorties and on-station time will be significantly reduced as aircraft have to fly from more distant locales. This in turn will strain the U.S. aerial refueling capability, which will be hard pressed to sustain long range operations as well as facilitate reinforcement transfer to the theater. Further, it raises the specter of increased losses, as damaged aircraft or those without return tanker support will be without a proximate place to land. Finally, it will curtail the effectiveness of the forward arming and refueling points (FARPs), which are currently touted by the Joint Force as a way of conducting distributed and short duration aviation operations from non-fixed points.

Singapore offers a multi-faceted case study. Viewed by many as the Southeast Asian partner closest to the United States, Singapore hosts the U.S. Navy command responsible for organizing logistics operations across the U.S. Seventh Fleet, as well as theheadquarters which controls U.S. Navy Littoral Combat Ships in the region. As a related aside, the U.S. military presence in Singapore began when Singapore offered its Sembawang facility to the U.S. Navy when it was evicted from its bases in the Philippines in 1993. U.S. ships today are rotationally deployed to Singapore’s Sembawang port facility, and the Changi Naval Base was expanded for the express purpose of accommodating U.S. nuclear-powered aircraft carriers. U.S. P-8A routinely fly from Singapore’s Paya Lebar Air Base.