Does This Picture of a B-1 Bomber Prove Aliens Exist? 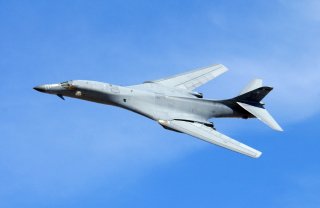 Here's What You Need to Remember: The final consideration that UFO experts should ask is why would you keep the plane in a cloaked state on the runway? Such technology would likely require vast amounts of energy, and then there is always the fact that someone might walk into it—something that has been used as a joke in science fiction—or worse, not be able to find the plane.

Although the point of a “cloaking device”—a hypothetical technology common to science fiction—is to make something invisible to the naked eye, even in movies and TV the technology isn’t exactly perfect. Instead of making an object, such as an aircraft, completely invisible there is often a faint but still noticeable shimmer or blur.

At least that’s how it works in Star Trek, which was the first to conceptualize the technology in its 1966 episode “Balance of Terror” where the selective bending of light made a spacecraft essentially invisible to sensors and visual detection. Yet it wasn’t until the 1968 episode of the series “The Enterprise Incident” in which the technology was actually given a name, and since then the concept of cloaking devices has been seen in countless science fiction narratives in film, TV and video games.

Recently UFO conspiracy theorists offered visual “proof” that the technology exists, which is ironic considering that a cloaked craft shouldn’t be something you’d actually see.

Look and You Shall Find It

The UK’s Daily Express reported that the UFO hunters widely shared an image from Google Earth that they believed clearly showed alien technology—and possibly even an alien craft—at Dyess Air Force Base (AFB), Texas. The image has caused a stir in the UFO community, the British tabloid reported.

Next to a parked B-1B Lancer Bomber appears a visual anomaly, which “extraterrestrial expert” Scott Waring—who first apparently discovered the image—suggested was a cloaked U.S. Air Force aircraft or perhaps even a cloaked alien spaceship. He shared the images on the UFO Sightings Daily website.

“I was looking for UFOs and alien bases using Google Earth today and came across something that just blew me away,” he told the tabloid.

Waring, who also claimed that he “worked” on B-1 bombers at Ellsworth Air Force Base, said he determined the blur in the image wasn’t the result of photo manipulation but was, in his opinion, a cloaked B-1 bomber. Waring added that if you rotate the map 360 degrees viewers can even see a second B-1 that is also cloaked.

“It makes sense, you see the black paint already on the B1 is cloaking technology that absorbs radar so it won’t reflect a signal back and be seen, thus it’s nearly invisible. It really makes sense to use alien technology on a B-1 and create the most perfect aircraft ever.”

The Truth is Far Simpler

The fact that someone looking for a UFO would find one is a point we’ll leave aside, but skeptics were quick to address the UFO expert’s claims. The truth is out there, but it is far simpler than perhaps most UFO enthusiasts would like.

The skeptics noted that “Google Earth image sometimes store old images in their cache,” so when a new image was taken it overlaps and creates a ghostly image. Such “ghosting” commonly occurs in film-based photography and such phenomena are also a regular occurrence with Google Maps. Thus it is likely—almost certain—that a B-1 was simply in different places on the tarmac when a second photo was taken and hence left a ghost image.

But even beyond the obvious reasons for why the image shouldn’t be taken at face value; and there are other reasons that easily debunk the cloaking theory. The most obvious is that the B-1B is far from the most “perfect” aircraft, and despite its sleek profile it isn’t exactly what would be considered cutting edge either.

Development on the aircraft begin the late 1960s while Star Trek was still on the air, and while the bomber has been going through numerous updates and upgrades it seems difficult to believe a cloaking device would be among the first choices to put on such an old airframe. Moreover, Waring showed some ignorance as the B-1B isn’t technically a stealth aircraft—certainly not to the level of latter aircraft.

That begs the question, why wouldn’t such “cloaking” technology be applied to more modern aircraft such as the B-2 Spirit, F-22 Raptor or certainly the F-35 Lightning II. For what the F-35 costs some might even question why it doesn’t have a cloaking device. It is also convenient that a UFO expert would suggest that the technology must be alien as well, instead of assuming that perhaps the military had developed a special camouflage to conceal aircraft on the ground.

Since the beginning of the development of military aircraft, it was common to paint the airplanes to match the terrain to make them harder to see, but apparently, such thinking seemed lost on those who are certain the truth is out there.

The final consideration that UFO experts should ask is why would you keep the plane in a cloaked state on the runway? Such technology would likely require vast amounts of energy, and then there is always the fact that someone might walk into it—something that has been used as a joke in science fiction—or worse, not be able to find the plane. As then Admiral James T. Kirk said in the 1986 film Star Trek IV: The Voyage Home, when exiting a cloaked spaceship, "Everybody remember where we parked."