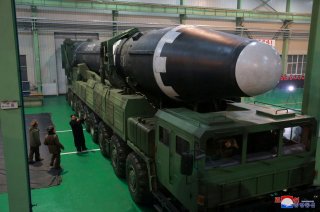 Here's What You Need to Remember: North Korean authorities claimed the missile could “strike anywhere on earth”—although an obvious exaggeration, the Hwasong-14 does manage to set an important precedent. At a likely range of around 10,000 kilometers, it is the first North Korean missile capable of reaching mainland North America.

“The United States and its Asian allies regard North Korea as a grave security threat,” opened a recent Council on Foreign Relations report on the DPRK’s military capabilities. These concerns are not entirely misplaced; North Korea is believed to own a stockpile of around sixty nuclear weapons, including a powerful and steadily growing arsenal of intercontinental ballistic missiles (ICBM’s). This is what three of North Korea’s most powerful ICBM models—the Hwasong 14, 15, and 16—are capable of doing.