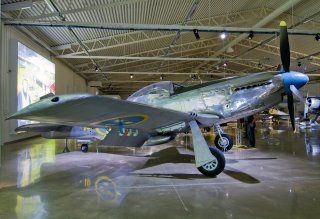 Here's What You Need To Remember: The Mustang was one of the most widely produced, versatile aircraft of the 1940s and 1950s. Unfortunately, many were lost over Korea - though many more survived.

For around $1.9 million you could buy a Cirrus Vision Jet, the world’s first single-engine private jet—and while it lacks the amenities of more expensive personal luxury aircraft it still allows for you to bypass all the “little people” in the airport terminal, and it is “wheels up” when you’re ready to fly. However, for two million dollars more you could own a far more significant aircraft—one that is truly a piece of history.

An original World War II era North American Aviation P-51 fighter-bomber is now up for sale. According to Auto Evolution, this particular aircraft is located in Germany and is being offered for sale for 3.3 million euros or roughly $3.9 million. Unlike most private aircraft, which significantly decrease in value, the P-51 has reached the stratosphere in terms on value!

The original unit cost of the aircraft in 1945 was around $50,985—or equivalent to $590,000 today. That increase outpaces even the rarest of classic cars, but one factor is that while 15,000 or so were built during the Second World War, only about 150 are airworthy and most are in museums.

The aircraft being offered for sale in Germany also underwent a significant two-year restoration. For those who just can’t raise the $3.9 million, another P-51 is now available in Oklahoma for $2.5 million with financing available—however that still breaks down to just over $15,300 a month.

World War II and Beyond

The P-51 Mustang first took flight in 1940, and it was used by the United States military throughout the war, but also by the Air Forces of the UK, Canada and New Zealand.

The P-51 earned a solid reputation during the war as an air-superiority fighter. It was fast, maneuverable and most importantly, long-ranged enough to escort B-17 and B-24 bombers deep into Nazi-occupied Europe in the latter years of the Second World War. However, due to its lighter frame and liquid-cooled engine that would seize up if hit, it was not the ideal ground-attack aircraft; that honor was reserved for the heavier, clunkier but remarkably tough P-47 Thunderbolt.

Unfortunately, because the United States Air Force unwisely junked the Thunderbolt after World War II meant the more fragile Mustangs were relegated to ground attack in Korea and took heavy losses in the process. That helps explain where many of those 15,000 World War II vintage aircraft ended up!

That lucky individual who is able to acquire the P-51 should try to reach out to actor Brad Pitt and ask to go flying together, as the star of The Inglorious Basterds and Fury used some of his A-list’er money to buy a restored World War II Royal Air Force Supermarine Spitfire. According to reports he spent nearly $4 million on that particular aircraft, so slightly more than the current cost of the P-51.

For those with not quite so much money to burn—or those who prefer to stick to the ground—there is always the option to buy a tank. An M4 Sherman was going to the auction block, and it was expected to sell for around $1 million.

Peter Suciu is a Michigan-based writer who has contributed to more than four dozen magazines, newspapers and websites. He is the author of several books on military headgear including A Gallery of Military Headdress, which is available on Amazon.com. This article first appeared in November 2019.