The F-117 Nighthawk is Unlike Any Stealth Fighter 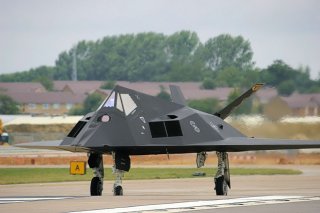 Here's What You Need to Remember: Despite the platform’s success, the United States Air Force opted to retire the F-117 in April 2008. The Air Force ultimately retired the Nighthawk as a cost-saving measure as the service struggled to pay for the Lockheed Martin F-22 Raptor.

It was an aircraft that may have simply been ahead of its time. The Lockheed Martin F-117 Nighthawk was the first operational aircraft to be designed around stealth technology, and while commonly referred to as a “stealth fighter,” it was actually a ground attack aircraft. The platform was developed during the late 1970s in response to an Air Force request for an aircraft that would be capable of attacking high-value targets without being detected by enemy radar.

New materials and techniques developed during the “space race” allowed engineers to design the aircraft with radar-evading “stealth capabilities.”

Earlier this month one F-117 headed to the Palm Springs Air Museum, where it became part of the permanent collection. The fact that one of the aircraft is heading to the museum is notable as this is only the fourth F-117A to end up as a museum exhibit. One other aircraft, named “Midnight Rider,” arrived this August at Hill Aerospace Museum in Utah in August, while “Unexpected Guest” was expected to be displayed at the Ronald Reagan Presidential Library this year. “Shaba” will also be transported to the Kalamazoo Air Zoo Museum in Michigan for restoration and future display.

Four of the prototype aircraft are displayed at various museums and military bases. The first prototype/test aircraft was presented to Nellis Air Force Base, Nevada in 1992 and became the first F-117 to be made a “gate guardian.”

The second prototype was delivered to the National Museum of the United States Air Force at Wright-Patterson AFB outside of Dayton, Ohio in July 1991; while the third prototype is now at Holloman AFB, New Mexico. That aircraft, which was painted to resemble the first F-117A to drop weapons in combat, was also the first to be revealed to high-ranking officials at Groom Lake in December 1983, which was also the first semi-public unveiling of the aircraft.

The fourth prototype was previously at Blackbird Airpark Museum in Palmdale, California, but it is undergoing restoration work and will be displayed at the Air Force Flight Test Center Museum at Edwards AFB sometime next year.

In 1989, the F-117A was awarded the Collier Trophy, one of the most prized aeronautical awards in the world.

The F-117A first saw combat just months later, when two from the 37th TFW were used in Operation Just Cause on Dec. 19, 1989, against military targets in Panama. The aircraft was used in the Persian Gulf War when the 415th and the 416th squadrons of the 37th TFW were deployed to Saudi Arabia. During Operation Desert Storm, the F-117As flew 1,271 sorties, achieving an 80 percent mission success rate, and suffered no losses or battle damage.

The ground attack aircraft were used in a conflict in Yugoslavia, where one was shot down by surface-to-air missiles in 1999, the only Nighthawk to be lost in combat. This occurred on March 27, 1999, when an S-125M missile crew from the Serbian 250th Air Defense Missile Brigade fired two missile V-600 missiles at the aircraft when it was flying back to its base in Italy after bombing a military target outside of Belgrade. Named “Something Wicked,” its remains are on display at the Museum of Aviation in the Serbian capital city.

Despite the platform’s success, the United States Air Force opted to retire the F-117 in April 2008. The Air Force ultimately retired the Nighthawk as a cost-saving measure as the service struggled to pay for the Lockheed Martin F-22 Raptor. At the time, the Air Force claimed that the advent of the air superiority-oriented Raptor—and eventually the F-35—meant it no longer needed the F-117.

While the aircraft has been officially retired, a portion of the fleet has been kept airworthy and, as noted, few museums have even been provided with the airframe. So while unlikely, it is possible the F-117 Nighthawk could get a chance to fly again. Until then, the best way to see this early cutting-edge aircraft is in a museum.