Is the F-15EX Stealthier than the Original F-15? 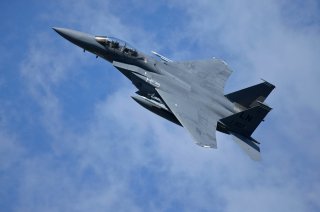 Key Point: Boeing developers have explained that the outer mold line of the new F-15EX variant is similar to the legacy aircraft, but it does incorporate some modifications intended to strengthen the wing and fuselage.

There are several much lesser-recognized variables regarding the significance of the upgraded Air Force’s F-15EX jet fighter’s first flight. Alongside the highly visible discussion regarding its more affordable cost and upgraded fourth-generation technologies, there is speculation that the F-15EX could actually be a little stealthy.

Interesting question, as much is being said about how the new, higher-tech aircraft is still a fourth-generation fighter in a global universe of fifth-generation aircraft. Yet to what extent do some of the upgrades potentially push the envelope beyond what is thought of as fourth-generation? Yes, it is a 1980s aircraft, yet not only does it contain quantum-like improvements in computing, sensing and weaponry, but the fuselage itself has been adjusted as well. Naturally its construction, configuration, coating and external shape do not resemble the stealthy exterior of an F-22 or F-35, and it does not appear to have an internal weapons bay, yet the shape of F-15EX does seem to have a few stealth-like attributes.

For instance, my colleague at The National Interest, Mark Episkopos, pointed out in a recent essay that the F-15EX does have conformal fuel tanks, something which not only adds fuel to extend mission dwell time but also smooths out the fuselage into a flatter, more horizontal and therefore slightly stealthier shape. Also, while Boeing developers do explain that the outer mold line of the new F-15EX variant is similar to the legacy aircraft, it does incorporate some modifications intended to strengthen the wing and fuselage.

While not as flat, sloped or rounded as a fifth-generation plane, and most likely not built with a mind to seams, bolts and other attachments specific to procedures needed to construct a stealth aircraft, its fuselage does look somewhat rounded and horizontal. Moreover, one could certainly make the case that it does slightly resemble a stealthy F-22 in some respects with its double engine exhaust and body shape. At the same time, the F-15EX does have a protruding cockpit, much like the original variants, as well as some sharp edges, likely to generate a stronger radar return signal.

The kind of effort with the F-15EX is not fully unprecedented, in the sense that the Navy has spent the last several years working with Boeing to integrate a handful of upgrades, enhancements and service-life extensions for the F/A-18 Super Hornet. Several years ago, the Navy and Boeing added new cockpit technology, new software technology called Magic Carpet to improve carrier landings, infra-red search and track targeting technology and, sure enough, conformal fuel tanks as well. While the Navy hesitated when it came to using the word “stealth” yet clearly the conformal fuel tanks do lower the radar signature for sure, as well as bring other advantages such as extended mission time. Also, perhaps of equal or even greater significance, previous Navy efforts with the F/A-18 also included engineering smoothly-shaped external weapons pods for ordnance carriage in a clear effort to reduce the sharp contours and radar signal return resulting from hanging pointed weapons off of weapons pylons under the wings. The effort was not so much to believe a stealthy F/A-18 had come to life, but rather to try to find ways to help lower the radar cross-section and prepare the aircraft for a newer, more advanced and high-tech threat environment.

Yet another much-discussed advantage to the F-15EX, which certainly bears upon survivability, is its sizable weapons carrying capacity. For example, the F-15EX is now operational with a cutting-edge weapon called Stormbreaker, a long-range, all-weather precision guided bomb able to track and destroy moving targets at ranges out to 40km. The bomb, slated to also fire from the F-35 and other platforms, is able to use a first-of-its-kind tri-mode seeker using infrared, millimeter wave, and semi-active laser targeting.

This article first appeared in February 2021 and is being republished due to reader interest.