A Stealthy F-15X: A Good Idea or a Waste of Time for the Air Force? 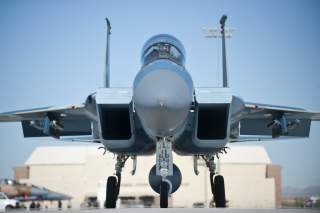 A recent article concerning Boeing’s pitch to the U.S. Air Force of a cheap, modestly upgraded F-15X fighter elicited lamentations from some commenters that the Air Force was not enticed by a more ambitious proposal for the F-15SE Silent Eagle—an F-15 with a reduced radar cross-section.

By comparison, the U.S. military’s newest fourth-generation fighter, the FA-18E/F Super Hornet, might as well be called the Silent Hornet with an RCS ranging between .1 and 1 m2. The French Rafale has a 1m2 RCS, and the Swedish Gripen and Eurofighter Typhoon around half that at .5m2. Relatively small, RCS-optimized fighters also include the F-16C (1.2 m2) and Chinese J-10 (1.5 m2) Even Russia boasts that its longtime counterpart to the F-15, the Flanker, has been improved with an RCS between 1 to 3 m2 in the most advanced Su-35S model.

This is because for every order of magnitude (factor of ten) RCS decreases by, detection range decreases only by 43.7 percent. Thus a 1 m2 RCS will not be detected at one-tenth the distance that a 10 m2 RCS will, but something more like three-fifths the distance. That’s why true stealth jets like the F-22 and F-35s have had their cross-sections reduced to around the size of a golf-ball and a marble: .001 to .0001 m2.