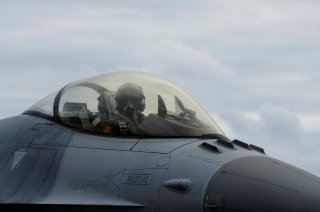 Editor's Note: Scholar Dean Cheng the Heritage Foundation has also written for us about this important topic. You can find his essay here.

Here's What You Need to Remember: The U.S.-Taiwan relationship has been awkward since Washington shifted diplomatic recognition from Taipei to Beijing in the late 1970s. Since then the United States has maintained a posture of “strategic ambiguity,” arming the islanders while remaining noncommittal about whether it would take a direct hand in fighting a cross-strait war.

The Trump administration informally approved a sale of 66 F-16V Viper fighter jets to Taiwan, presumably to replace the elderly contingent of F-5E/F Tiger II fighters flown by the Republic of China Air Force (ROCAF). The sale was bundled into a $62 billion contract award to defense manufacturer Lockheed Martin. Taiwan’s share of the deal will reportedly total around $8 billion. The air force’s fleet of 144 older F-16A/B aircraft is currently being upgraded to F-16V standards. Assuming the U.S. Congress endorses the sale, as seems likely, the two projects will yield a more modern air force centered on more uniform airframes and equipment.

But is it money well spent for the island?

Yes and no. Yes, arguably, on the politics of the deal. For years reputable analysts have cast doubt on whether the ROCAF can still rule the sky over the island. Back in 2016, for example, a team from RAND pointed out that both numbers and the quality of individual aircraft and weapons increasingly favor China’s air force. This is not the large but backward People’s Liberation Army Air Force (PLA Air Force) of old, waiting to be clobbered by superior ROCAF aircraft and airmanship. But the aerial correlation of forces might not even matter. The People’s Liberation Army fields a panoply of ballistic and cruise missiles that could destroy ROCAF fighters before they ever took to the sky.

And yet. Weapons have political as well as combat value. Think about the message President Tsai Ing-wen would be broadcasting to her constituents if the ROCAF more or less dismantled its fighter force and shifted the resources that now go to fighters to fund surface-to-air missiles, as the RAND team suggests. Preemptively admitting that Taiwan would lose the battle to command its own airspace could deflate morale on the island—and human morale is as important as a formidable armory to martial success. Continuing to upgrade the air force projects confidence that Taiwan remains the master of its own fate. Islanders will take heart.

There’s also the matter of transpacific relations. The U.S.-Taiwan relationship has been awkward since Washington shifted diplomatic recognition from Taipei to Beijing in the late 1970s. Since then the United States has maintained a posture of “strategic ambiguity,” arming the islanders while remaining noncommittal about whether it would take a direct hand in fighting a cross-strait war. The prospect that America might involve itself in the Taiwan Strait—skewing the balance toward smaller but superior Taiwanese armed forces confronting bigger but inferior Chinese forces—seemed to create enough doubt among Chinese Communist magnates to deter them from making war.

Strategic ambiguity may no longer suffice if PLA forces are now bigger and better than the island’s, as RAND warns. If it no longer suffices, Taipei and Washington need to show a solid front to implant doubt in mainland minds anew. In recent years U.S. administrations have edged toward excising the ambiguity from strategic ambiguity, putting Beijing on notice that the United States would join forces with Taiwan to stymie an assault on the island. But they haven’t quite removed the squish. Foreign-policy officials have yet to issue an unequivocal commitment to Taiwan’s defense. They insert hedging language into statements assuring the islanders America will keep faith with them. Presumably the dissembling is meant to dissuade Taipei from declaring independence from China—and rupturing a redline Beijing has drawn time and again.

Weapons sales are one token of solidarity between the two partners. Furnishing the ROCAF with frontline—albeit non-stealthy—tactical jets shows that the United States intends to honor its commitment to Taiwan as required by U.S. law. America has skin in the game of Taiwan’s defense. For Taipei’s part, procuring a modern fighter force from U.S. suppliers shows that Taiwan has skin in the game of its own defense. It will fight hard if attacked, and is a worthy beneficiary of U.S. military help. This mutual show of political solidarity could convince Beijing that the PLA will not have the luxury of fighting an isolated Taiwan. Allied forces will do battle in unison.

That’s the yes side of the ledger. Here comes the no side—the strategic and operational side. Earlier this month the Tsai administration announced a 10.2 percent increase in the defense budget over last year’s figure. That is excellent news. Unfortunately, Taiwan is a compact island with a modest-sized population and thus a modest tax base. A 10.2 percent increase in defense spending comes to just $1.4 billion. For comparison’s sake, that’s roughly what the U.S. Navy expects to pay for the first copy of its new guided-missile frigate. Taipei cannot afford to keep pace with the mainland in defense spending. If it cannot spend more, it must spend more wisely.

It is incumbent on President Tsai and her advisers to mull the opportunity costs of the looming F-16V purchase. What Taipei spends on Vipers cannot be spent on something else, barring a major increase in the fraction of GDP allocated to defense. If $8 billion would buy platforms and weapons with greater operational and strategic heft, budgeteers should redirect funding to procure them.

How to tell whether one widget is more valuable than another? Well, start with political aims. Taiwan’s political goal is simple: survive. To preserve its de facto independence it must field forces able to repulse a cross-strait amphibious assault and devise inventive ways to use them in combat. Granted, Beijing has other strategic options. It could batter the island with air or missile strikes, seize outlying islands, or impose a naval blockade. The PLA can punish it without essaying amphibious landings. But Chinese leaders covet possession of the island. To occupy it they must put superior firepower on Taiwan to overwhelm the defenders and exert control. That means placing boots on the ground in large numbers. Shipboard transport remains the most plausible way to move mass armies across the sea.

In 2008 my colleague Professor William Murray urged Taiwan to make itself a “porcupine,” acquiring weaponry to make an amphibious attack a loathsome prospect for the PLA. That makes strategic sense. The island has the makings of an exceptionally prickly and indigestible porcupine. For example, an older RAND study overlaid the map of likely landing beaches on Taiwan onto the map of the Normandy beaches where Allied forces landed in 1944. The proportions and the roughness of the terrain were comparable. The coauthors suggested that assaulting Taiwan today would be as fraught with hazard as assaulting Fortress Europe was back then. That’s a daunting prospect for any force.

Taiwan’s armed forces can make it more daunting still. For instance, truck-launched anti-ship and anti-air missile batteries pack a wallop. They could deal out heavy punishment against approaching PLA surface shipping and warplanes overhead, and then scoot away to evade counterattack. Coalition air forces’ vain “Scud hunt” during Desert Storm shows how hard it is to find and dislodge mobile missile launchers. If that’s true on a barren plain like western Iraq, it would be doubly true on a mountainous, densely wooded island like Taiwan.

You can buy a lot of missiles for $8 billion.

A couple of years after Bill’s article, Toshi Yoshihara and I took to writing about Taiwan’s seaward defense for the Jamestown Foundation’s China Brief. We carried the logic of the porcupine strategy out to sea. After studying the problem we concluded that the Taiwan Navy stood little chance of commanding the sea. In other words, it could no longer wage a major fleet action, sweeping the PLA Navy from vital waters more or less permanently. But a reconfigured fleet could deny China command—and sea denial would satisfice for Taiwan. The Taiwan Navy doesn’t need to use the sea to project power outward. It merely needs to keep the PLA Navy from using the sea to project power inward.

In effect, we implored Taiwan to extend its defensive quills out to sea. Shipbuilders should construct swarms of small, stealthy, fleet-of-foot missile craft able to harry surface vessels in the strait. These winsome boats should turn the island’s rugged, indented geography to advantage, using fishing harbors and coves around its periphery for concealment and as launchpads for raiding PLA shipping. The fleet should operate in concert with shore-based porcupine forces to fend off attack. The result was a sort of “people’s war at sea” strategy, a strategy that harnesses irregular operational methods and tactics for defensive ends. In effect we called on Taiwan to turn Maoist strategy against Maoists.

No sea control for China, no amphibious invasion.