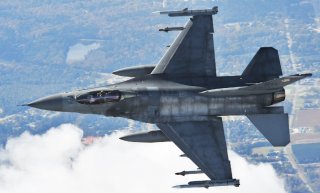 Update: James Holmes of the U.S. Naval War College has also authored a new essay on this topic. You can find that here.

After an arduous trek of nearly 20 years, the United States and the Republic of China, the governing entity on Taiwan, this week made the final arrangements for the sale of 66 advanced F-16s to Taiwan. Valued at some $8.1 billion, it is the largest arms sale to the island in years. Its jagged course also reflects the undercurrents that have long affected arms sales and the broader US-Taiwan relationship.

The idea of selling more advanced F-16s to Taiwan arose toward the end of the 1990s. Taiwan’s air force was confronted with the obsolescence of the F-5, a 1960s-vintage fighter designed as a lightweight, cheap aircraft primarily for export. On the mainland, the People’s Liberation Army Air Force (PLAAF) had begun a massive modernization effort and was adding more and more advanced Su-27/J-11s to its inventory, as well as the HQ-9 advanced surface-to-air missile. It was clear that the F-5 would be unlikely to survive in the face of increasingly sophisticated Chinese fighters and missile defenses. The US and Taiwan governments both concluded that the best solution would be to sell Taiwan F-16C/Ds, which were more advanced than the F-16A/Bs sold by President George H.W. Bush to the island in 1992. The F-16C/D not only had more modern avionics, but was better suited to undertaking ground support missions.

Unfortunately, politics on both sides of the Pacific led to constant delays. In 2000, when Chen Shui-bian of the Democratic Progressive Party (DPP) won the race for the presidency of Taiwan, the Kuomintang (KMT) opposition in the Legislative Yuan (Taiwan’s legislature) voted against appropriating the funds necessary for the purchase of F-16C/Ds. The Taiwan legislature’s obstructions frustrated the George W. Bush administration, who eventually pulled the entire sale in 2005.

When Ma Ying-jeou came to power in 2008, there was renewed interest in Taipei, but the Obama administration, intent on fostering improved relations with China and focused on obtaining Beijing’s cooperation on climate change, actively discouraged the F-16C/D sale. They opted, instead, for a modernization program for the island’s F-16A/B fleet. While this improved the 100+ F-16 fighters already in the ROC Air Force inventory, it did nothing to address the aging of the F-5s.

Finally, after nearly two decades, Taiwan will be able to purchase new F-16s. These new aircraft, built to the F-16V standard, will give the ROC Air Force a streamlined logistical infrastructure, since the bulk of its inventory will be the F-16 platform. (The remainder will be 100 domestically produced Indigenous Defense Fighters and about 50 Mirage-2000s.) All of these F-16s will have the APG-83 Active Electronically Scanned Array radar (which does away with the mechanically moving radar “dish”), glass cockpits, and a high volume, high-speed data bus to handle the greater information flow. The new aircraft will also have conformal fuel tanks, which should extend their range and endurance without reducing weapons loads.

The new F-16s, in combination with the upgraded fighters, will have both a security and a political impact. Militarily, it will enhance the ROC Air Force’s ability to defend Taiwanese airspace. This has been under growing pressure, and not only from China’s ongoing military modernization efforts. Beijing has applied overt pressure, as well. In 2019, Chinese fighters broke a nearly decade-long precedent and began to cross the mid-line of the Taiwan Straits. They have since repeated these flights, most recently this month. The result has been increased demands on Taiwan’s fighter force, as the island’s defenders have had to scramble flights to track and potentially counter Chinese operations.

Similarly, Beijing has ordered its air and naval forces to circumnavigate the island as well. Chinese H-6 bombers (the Chinese version of the Soviet Tu-16 Badger) have flown around the island; Chinese naval task forces, including ones centered on the new aircraft carrier Liaoning, have also sailed around the island. This puts Taiwan’s east coast, once considered relatively safe, squarely in Beijing’s crosshairs, requiring coverage by Taiwan’s air defenses.

Politically, the completion of the sale signals both Taipei and Beijing that Washington continues to support Taiwan, and will continue to uphold the terms of the Taiwan Relations Act, which states that the U.S. will continue to provide Taiwan with such military articles as are necessary for its defense. This is true for all arms sales, of course, but takes on greater urgency given China’s renewed efforts to eliminate Taiwan’s last diplomatic outposts.

Beijing and Taipei had agreed to an informal diplomatic truce as part of the enhanced cross-Straits relations ushered in by Ma Ying-jeou in 2008. With the election of Tsai Ing-wen in 2016, however, Chinese leadership promptly began renewed courting of those states still recognizing Taiwan, picking off Gambia, El Salvador, Panama, the Solomon Islands, and Kiribati, among others.

Given Beijing’s efforts to isolate Taiwan, the United States plays a central role in Taiwan’s security. It is the only major power willing to brook Chinese disapproval and by providing Taiwan with the systems necessary for self-defense. Delays and deferrals of arms sales e raise questions in Taiwan (and hope in China) that the American commitment can be swayed.

From Beijing’s perspective, the sale is especially unwelcome given the impact of COVID-19. China’s mishandling of the epidemic, including the secrecy that allowed it to spread inside and outside China, as well as its refusal to cooperate with the World Health Organization (WHO), stands in sharp contrast to Taiwan’s response. The island was able to limit the spread of the virus without having to resort to authoritarian steps. As important, Taiwanese health officials had tried to warn the WHO, but were ignored, apparently due to Chinese pressure.

China’s dispatch of defective personal protective equipment (PPE) to various other states further cast Beijing in a negative light, and has led to some countries questioning why Taiwan, for example, should not be included in organizations such as the WHO’s World Health Assembly, when dealing with transnational threats. For the first time, a number of countries are starting to quietly question Beijing’s orthodoxy that one cannot have relations with China and maintain any sort of contact with Taiwan. A major American arms sale helps make the heterodox belief even more palatable.

This will not be the last major arms sale to Taiwan. As the PLA continues its modernization, Taiwan will need improved air defenses. It also will be vital for Taiwan to maintain advanced intelligence, surveillance, and reconnaissance capabilities, in order to maximize warning and reaction time. And Taiwan’s efforts to build an indigenous submarine will likely require ongoing outside assistance for not only the ship’s design but also key systems and armaments. The US is already providing expert consultation and support in many of these areas (e.g., the Taiwan submarine program), but sustaining these efforts will be essential as China’s military steadily improves.

As important, given China’s increasing pressure on the island, Taiwan will need the political support that is signaled by arms sales. Making clear to Beijing that neither Chinese cooperation on climate change nor an improved trade balance will lead the U.S. to abandon the island is essential for limiting the potential for miscalculation across the Taiwan Straits.