The F-22 Raptor Can Handle China, But a Hurricane? Forget About It 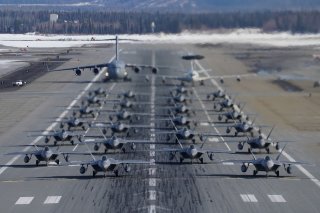 Here's What You Need to Remember: Whether this was the correct choice will always be debated: the F-22 is a phenomenal fighter that happens to be phenomenally expensive as well as maintenance-intensive. Recent F-22 availability has been intolerably low, the result of maintenance difficulties, spare parts issues and peculiar Air Force practices such as splitting off detachments of Raptors to send overseas.

Sometimes you need a strong wind to lay bare the consequences of folly.

Hurricane Michael did more than devastate the Southeast coast, including Tyndall Air Force Base in Florida, home of a squadron of F-22 Raptor stealth fighters, and center of F-22 training. It also showed that when you only buy 187 of an aircraft, it doesn't take much to shrink your force.

As many as seventeen Raptors—almost 10 percent of the fleet—might have been damaged by Hurricane Michael. These were aircraft that could not be evacuated because they were unfit to fly, a major problem for the F-22, which has suffered from low availability rates.

Whether or not the aircraft could have been somehow evacuated isn’t the point. Nor is this the first time that planes have suffered from natural disasters: the eruption of Mount Vesuvius in Italy in 1944 damaged U.S. bombers based nearby, while Homestead Air Force Base and several F-16 jets were trashed by Hurricane Andrew in 1992.

The problem is that bad things happen to airplanes. If there’s one lesson of aerial warfare since 1914, its that aircraft are a perishable item. Germany lost ninety-five thousand aircraft in World War II; the United States lost fifty-nine thousand planes. Israel lost a quarter of its air force in the 1973 October War, while the United States lost ten thousand fixed-wing aircraft and helicopters in the Vietnam War.

Such losses would be impossible today, not least because no one has air forces anymore that could absorb such losses (the United States today only has about five thousand military aircraft). But the fact is that aircraft are lost for a variety of reasons, of which combat is not the biggest reason: there are mechanical failures, pilot errors, bad weather.

In other words, the F-22 is arguably the best fighter in the world when it comes to air-to-air combat. But even so, it can fall prey to a variety of causes, of which hurricanes are one—albeit not the most likely—cause.

This wasn’t supposed to happen. Back in the late 1990s, the Air Force wanted at least 381 F-22s. But the Raptor proved too pricey, at around $412 million per plane (today's F-35 will cost around $100 million per aircraft). After years of bean-counting and dithering , in 2009 the Obama administration ended production of the F-22 after just 187 aircraft had been ordered.

Whether this was the correct choice will always be debated: the F-22 is a phenomenal fighter that happens to be phenomenally expensive as well as maintenance-intensive. Recent F-22 availability has been intolerably low, the result of maintenance difficulties, spare parts issues and peculiar Air Force practices such as splitting off detachments of Raptors to send overseas.

Whatever the mistakes made, the fact is that just 187 copies of an aircraft intended to engage in aerial battles with enemy planes doesn’t leave much room for error.