F-35: The World's Most Fearsome Fighter Is Getting More Affordable By the Day 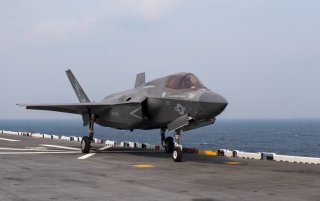 Here's What You Need to Remember: The long-term figures are unambiguous: Lockheed Martin has consistently driven down the F-35A’s flyaway cost between serial production batches.

As the US Air Force (USAF) charts acquisition plans into the coming decades, an unmistakable trend emerges for the country’s most advanced fighter jet: the state-of-the-art  F-35 program has made major strides in reducing costs over the past decade, and there are even more encouraging signs on the horizon.

The debate over costs runs usually across two primary metrics: flyaway and sustainment costs. The flyaway cost is simply the price of producing a single additional model. As its name suggests, this is a marginal cost figure that excludes sunk expenses like research and development. Meanwhile, the sustainment cost refers to the price of operating a piece of hardware, including manpower, maintenance, system improvements, materiel, and more. These two figures are not strictly related, capturing different aspects of the expenses associated with an aircraft. When considered in conjunction, they can offer a comprehensive picture of how much it costs to produce and fly an F-35.

The long-term figures are unambiguous: Lockheed Martin has consistently driven down the F-35A’s flyaway cost between serial production batches. Lot 1 is estimated to have a per-model cost of around two hundred million dollars; with Lot 5, the price dropped all the way down to around $100 million per model. Lot 12 saw the cost come down to $82.4 million and, as of Lot 14, the per-model cost now sits at $77.9 million. For a sense of scale, consider that the F-35 now not only has a markedly lower flyaway cost than the less advanced F-15EX (which is typically quoted at around $85-90 million) but is also cheaper than competing foreign fighters like the Eurofighter Typhoon. Indeed, the F-35 remains in high demand among US partners: Saudi Arabia, Spain, Qatar, Greece, the Czech Republic are among those that have expressed import interest in recent years.

“We really haven’t seen any sort of diminishing interest,” said Bridget Lauderdale, Lockheed Martin’s new F-35 program head. “As the jet performs — and frankly as, for example, our European partners are able to operate together and see the power and the strength of the capabilities on the platform and particularly as they are interoperating in their missions — we are seeing a stronger conviction around what this means to the security of their individual nations and to the effectiveness of the alliances.” Lauderdale added that “the airplane is doing its job and selling itself.”

The F-35 has been or is being purchased by over a dozen U.S. allies, helping the American defense industry to secure a foothold in the lucrative and increasingly competitive high-end jet fighter market. Meanwhile, the consolidation of US allies around a single fighter platform is a major boon for the principle of interoperability that sits at the heart of NATO’s international military infrastructure.

Sustainment outlays, too, have seen a steady decline, with the fighter’s cost per flight hour dropping by 23% over the past four years. The F-35’s current cost per flying hour sits at $36,000, a sharp reduction from  $44,000 in fiscal year 2018. Through further logistics optimizations, Lockheed Martin seeks to drive that figure all the way down to $25,000 by 2025.

Significant progress has been made, but the good news doesn’t end here. As the F-35 program matures and expands, Lockheed Martin will be in a position to continue leveraging economies of scale and refining its supply chains. This will drive the fighter’s costs down even further in coming decades, giving the Pentagon and the American taxpayer rising value throughout the F-35’s roughly fifty years of projected service.