Failure or Stepping Stone: Unclear what the Victor II was Good for 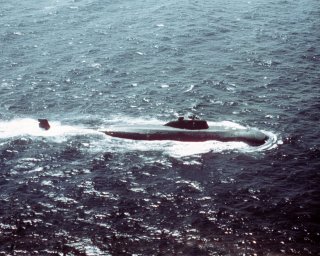 Here's what you need to know: Seven such submarines were commissioned from 1972 through 1978, but Soviet military leadership quickly discovered that the noise generation improvements to the Victor II-class were simply not good enough.

The ill-fated Victor II took modest steps toward solving one of the biggest problems plaguing the Victor-class series of nuclear-powered attack submarines but did little else to warrant its existence as a standalone submarine line.

Project 671 Yorsh, better known by its NATO reporting name Victor I, marked a massive leap forward for Soviet anti-submarine warfare capabilities, bringing robust underwater performance with its “teardrop” hull design. But the Victor I did little to address the vast Cold War-era gap in acoustics between Soviet and NATO submarines. Submarine detection generally occurs passively, through listening; U.S. and British submarines were quieter, which meant that they could hear Soviet submarines before the latter could hear them. This, in turn, translated into a significant tactical liability that has bedeviled the Soviet Navy and its Russian successor since the end of World War II. It is this crucial shortcoming that the Soviet shipbuilding industry intended to redress with the submarine’s Victor II revision, whilst also taking the opportunity to significantly upgrade its offensive capabilities.

Victor II, also known as Project 671RT Syomga, revised the positioning of key components relating to the propulsion mechanism with the overall effect of reducing the submarine’s noise signature. In an engineering technique called raft mounting, noisy components were isolated and installed onto noise-absorbent materials. To accommodate these changes, the turbine compartment had to be slightly increased in size. The Victor II is around 102 meters long, as compared to the 92.5 meters of its Victor I predecessor. It is likewise heavier, registering a submerged displacement of around 7,200 tons.

Aside from improvements in acoustics, Victor II’s other major innovation was in weapons loadout and delivery. Victor I’s six standard 533-millimeter torpedo tubes were replaced by a new configuration consisting of two 650-millimeter tubes and four 533-millimeter tubes, offering compatibility with heavier and more powerful longer-range torpedoes. These new torpedoes were reportedly capable of disabling even larger surface ships, meaning that the Victor II could potentially threaten U.S. carrier strike groups in ways that prior Soviet submarines could not. The submarine’s power systems had to be expanded to support the new weapons, further explaining why the Victor-II was so much larger than its Victor-I counterpart. The fire control system saw additional modifications, translating into marked improvements in targeting and payload delivery.

Seven such submarines were commissioned from 1972 through 1978, but Soviet military leadership quickly discovered that the noise generation improvements to the Victor II-class were simply not good enough. In part with information collected from the infamous Walker spy network, the Soviets concluded that the Project 671RT vessels still lagged behind their U.S. counterparts in acoustics by an unacceptable margin.

Moscow decided to cut the Project 671RT line short and to try once more with a third—and what would become the submarine’s final—revision, the prolific Victor III series. All Victor II vessels were retired by 1996.

This article is the second entry in a three-part series on the capabilities and history of the Victor-class submarines.