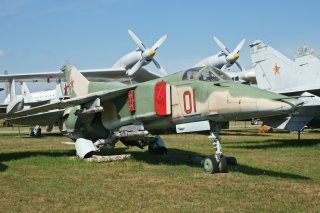 Here's What You Need To Remember: In the end, only a single regiment of Soviet MiG-27s saw action during the Cold War, deployed to Shindand airbase in Afghanistan in 1988 through February 1989. They were principally used in high-altitude raids and reportedly made effective use of ODAB-500P fuel air explosives with a deadly blast radius extending as far 400 meters. However, many of the MiG-27’s advanced capabilities were judged to be overkill for counter-insurgency operations.

On December 27, 2019, the Indian Air Force bade farewell to the last of the beefy MiG-27 attack jets it had dubbed the Bahadur (“Valiant”) in a ceremony held by No. 29 squadrons at Jodhpur air station.

The powerful swing-wing jets were Soviet warplanes license-built by India and upgraded with 2000s-era avionics. Armed with unguided bombs, rockets and an earth-shattering six-barreled Gatling guns, the type had seen extensive action during the 1999 Kargil War, blasting Pakistani troops on Himalayan peaks at 18,000 feet above sea level.

While the Sukhoi design bureau developed the improved Su-17/Su-20/Su-22 “Fitter” family of supersonic attack jets and the armored, subsonic Su-25 Frogfoot, rival Mikoyan-i-Gurevich opted to create a ground-attack model of its forthcoming MiG-23 ‘Flogger’ single-engine fighter. A late-coming Soviet response to the American F-4 Phantom, the MiG-23 was a fast but temperamental beast due to the trickiness of its swing-wing mechanisms.

The huge Shipunov gun had a cyclic fire rate of 5,000 rounds per minute (see this video), and its gas-operated system spun to maximum firing rate faster than the hydraulic mechanism on the famous 30-millimeter GAU-8 Avenger cannon on American A-10 aircraft.

“The aircraft seemingly came to a stand-still, engrossed with its target – tracers creating an illusion of morse communication. Smoke and the smell of cordite entered the cockpit, and in a flash, it was all over…the airframe shuddered during the trigger pull, and surge was a possibility, hence the exit had to be smooth and deliberate.”

Despite the problems with the cannon, the MiG-27 was otherwise deemed a reliable, smooth-handling aircraft. Though not particularly agile, it was both fast and a stable firing platform with good low-speed performance.