Fighter Planes versus Missiles: How the Battle of Britain Was Won 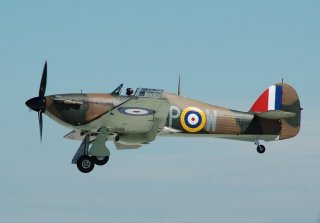 Here's What You Need To Remember: As military planners today contemplate ways to defend against the threat of today’s far more survivable, longer-range, and precise cruise missiles, the Allied experience in Operation Diver should offer both hope and a sobering warning.

London was under siege as it never had been before. Starting June 13, 1944—merely a week after the triumph of the D-Day landings—V-1 cruise missiles launched from Nazi-occupied France began raining down upon the metropolis, their rapid-firing pulset jet motors emitting a horrid buzzing drone.

These attacks—which increased in volume to 100 a day—killed thousands, and the threat posed by them caused over a million Londoners to flee for the countryside, leading to major economic disruptions.

Unlike the bombardment during the Battle of Britain in 1940, during which Royal Air Force fighters inflicted unsustainable losses on German bombers, the unmanned V-1s were cheap and expendable.

While Allied armies struggled to breakout of the hedgerows of Normandy to seize V-1 launch sites around Calais, the British military had to devise solutions to the new threat—fast.

That solution came in the form of Operation Diver—a multi-layered defense system designed to thin-out the incoming V-1 barrages.

Fortunately, the V-1—described in greater detail in a companion article—flew in a straight line from its launch site, meaning they would approach from certain predictable avenues and couldn’t dodge defensive fire.

Radar-directed air defense patrols formed the forward-layer of Diver—but few fighters were fast enough to intercept V-1s, which could cruise between 340 to 400 miles per hour at low altitude.

The buzz bomb’s metal skin and engine also proved resistant to the rifle-caliber machine guns on many RAF fighters. And pilots who succeeded in detonating a V-1’s warhead risked being caught in the blast!

As a result, Allied pilots sometimes resorted to tipping V-1s off course with their wingtips—as photographed here.

The speediest low-altitude fighter at the RAF’s disposal was Hawker Tempest V, a souped-up model of the legendary Typhoon fighter bomber with redesigned laminar flow wings. The single-seat fighter’s bulky Napier Sabre engines could propel it to 435 miles per hour at medium altitude, or 390 at low altitude, and its four 20-millimeter Hispano cannons packed the punch to blast through the V-1’s metal skin from a safe distance.

The RAF eventually deployed six squadrons of Tempests in No. 150 Wing dedicated to V-1 hunting. They were joined by three squadrons of Spitfire Mark XIVs—boosted to high speeds by powerful Griffon engines—and three squadrons of American-built Mustang Mark IIIs (P-51Bs and Cs) flown by the RAF and Polish air force.

V-1s also sometimes came buzzing in at night. Three squadrons of Canadian and RAF twin-engine Mosquito night fighters used onboard radar to close in on the missiles before visually aiming at the hot glow of their engine exhaust.

The U.K. even rushed into service its first operational jet fighter, the Gloster Meteor, to chase V-1s in No. 616 squadron at RAF Manston starting on July 12, 1944. The Meteor F.1 could sustain 410 miles per hour lower altitudes, but its four 20-millimeter cannons initially proved jam-prone. Finally, on August 4 Meteors scored the first of fourteen V-1 kills.

In all Allied pilots shot down 1,951 V-1s, a third each of which were claimed by Tempest and Mosquito fighters.

But in the early weeks of the V-1 campaign, flak only batted down one out of every six incoming V-1s—and that after expending an average of 2,500 shells.

In short order, however, compact SCR-584 fire control radars were adapted to help compute anti-V-1 firing solutions. Furthermore, proximity-fused artillery shells which detonated once they approached within a pre-designated radius of their targets.

The combination of the new gun-laying radars and proximity-fused shells meant that by August 1944, batteries were bagging 60-80% of inbound V-1s, with only 100 shells expended per V-1 kill.

And for a good measure 2,000 barrage balloons tethered with thick wire cables sliced the wings off another 231 buzz bombs.

As V-1 launch sites in France were overrun, putting London out of range, starting September 1944 the Luftwaffe maintained a degree of pressure by lugging V-1s into range over the North Sea with modified Heinkel He-111H-22 bombers. This method also allowed V-1s to “flank” the established gun belts.

While a new belt of defensive flak guns was established to intercept attacks from the northeast, and effort was made to track and destroy the lumbering bombers before they could arrive within firing range.

The RAF also used a special radar-equipped Wellington bombers to serve as one of the first ever airborne early-warning aircraft. This managed to vector Mosquitos to shoot down eight He-111H-22s, but even more Heinkels were lost due to launch mishaps of their underslung V-1s.

MI5 also directed Spanish double-agent Juan Pujol to feed Germany’s Abwehr intelligence agency false information about where V-1s were landing and inflicting the most damage. Thus, despite Germany making major improvements to V-1 accuracy, they failed to increase in deadliness over the course of operations.

Last but not least, at one point no less than one-quarter of Allied strategic bombing raids were targeted at V-weapon sites. By one count that campaign cost the Allies 154 bombers and 700 aircrew. They delayed the employment of V-1s by months.

By the end of the main V-1 campaign against London, only one out of five V-1s on average was reaching its target. When Germany redirected V-1 strikes against Antwerp and Brussels starting in the fall of 1944, the U.S. installed a new radar-directed air defense artillery system called Antwerp-X which proved even more efficient—eventually knocking out 95% of incoming buzz bombs.

The anti-V-1 campaign consumed immense resources, but it ultimately significantly curtailed the extent of the damage. That was vital, because while only 2,419 of 9,521 V-1s launched at the U.K. reached their target, each buzz bomb that made it killed more than two and wounded seven on average—resulting over 6,100 killed and nearly 17,000 wounded.

As military planners today contemplate ways to defend against the threat of today’s far more survivable, longer-range, and precise cruise missiles, the Allied experience in Operation Diver should offer both hope and a sobering warning.