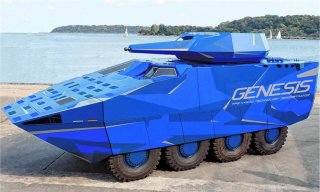 Here's What You Need To Remember: Vehicle electrification promises some enormous benefits to military logistics.

A German firm just unveiled an all-electric prototype infantry fighting vehicle. It could represent the future of battlefield mobility.

The German firm Flensburger Fahrzeugbau Gesellschaft recently showcased one of their newest vehicles. Their Genesis, an eight-wheeled all-wheel-drive infantry fighting vehicle is just a technology demonstrator, not intended to enter full general production. The technology it is demonstrating? Alternative fuels.

In comments given to Jane’s, one of the Genesis program managers explained why the Genesis took the form it has now, saying that the Flensburger Fahrzeugbau Gesellschaft “settled on an 8×8 in the forty-ton class as there are many out there, however, Genesis is mainly a technology demonstrator for alternative propulsion concepts.”

The Genesis benefits from having a hybrid-electric drive system. Lithium-ion batteries power each wheel, all eight of which can be individually steered, accelerated, or braked, giving the Genesis exceptional off-road handling, according to the manufacturer, FFG.

The U.S. Army is Onboard Too

It’s not just the Germans who are looking for sources of fuel other than traditional gasoline, diesel, or jet fuel. The Army is also on a mission for other types of fuel and giving a long hard look at electric options.

This interest has quite literally been driven forward thanks in part to a substantial increase in electric vehicles on the civilian market. The Army sees this shift from fossil fuels toward electrification as a potential boon to logistical supply chains for vehicles, and not only in terms of fuel. All-electric vehicle motors are made up of vastly fewer parts than combustion engine vehicles, simplifying both repair and maintenance, as well as spare parts supply chains.

One of the vehicles that could be the first to see its gas-guzzling guts ripped out and replaced with an electric motor is the Army-Marine Corps Joint Light Tactical Vehicle. Though the JLTV offers substation armor protection upgrades when compared to its HMMWV (Humvee) predecessor, it is nonetheless more of a reconnaissance and command vehicle than a front-line platform. This platform could stand to benefit from electric drive in particular, as it would drive virtually silently.

Still, there are several challenges to overcome. Speaking on the future electrification of the Army’s fleet, one general explained why current electric motor technology is better suited to smaller vehicles. “It is just too much of a drain on the battery,” he said. “But, if we can reduce fossil fuel consumption by transitioning our wheeled vehicles . . . wouldn’t it be prudent to consider that and have a plan to do so?”

Vehicle electrification promises some enormous benefits to military logistics, especially if it can be scaled up for larger vehicles like main battle tanks, trucks, or other large vehicles—and the United States is well-positioned to take advantage of this trend. Take Tesla’s recent Battery Day announcement. Despite the science jargon and somewhat unclear path forward, there are some interesting implications for the future of electric mobility. No doubt the Army would be interested.