Fourth Stimulus Check: Could Another $1,400 Be in Your Future? 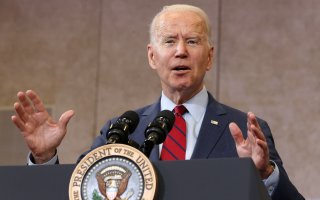 Here's What You Need to Remember: This week, President Joe Biden announced an agreement with a bipartisan group of Senators, in order to pass an infrastructure bill, and that that agreement does not include any type of stimulus checks.

Since the passage of the American Rescue Plan in March, which contained the third stimulus check of the coronavirus era, there has been little movement in Congress when it comes to a fourth round of checks.

Such a round remains very unlikely this year, but one new report lays out a scenario of how such checks could go forward.

According to the Motley Fool, following the recent defeat in the Senate of the Democrats’ voting rights legislation, “activists are ramping up pressure on Democratic lawmakers to make changes to the filibuster.” And if such a change were to happen, per the report, it would make a fourth stimulus check more likely.

“If lawmakers change the filibuster rules, the goal of doing so would be to make it easier for Democrats to pass legislation without Republican support,” the Fool report says. “Since the left has the White House, as well as a majority in the House and Senate, the end of the filibuster would mean that they could pass whatever bills they can get agreement on from their side of the aisle—even over united Republican opposition. That would be a major change from the status quo, and one that would make another check a real possibility.”

However, those expecting that scenario to take place shouldn’t get their hopes up.

The Democrats don’t appear to have the votes to change filibuster rules. The Senate is 50/50 between the senators who caucus with the two parties, and with Senator Joe Manchin of West Virginia opposing changes to the filibuster, the Democrats lack the votes to make that change. There are indications that Manchin isn’t the only Democratic Senator who favors keeping current filibuster rules in place.

But even if the filibuster did go away, that doesn’t mean a fourth stimulus check would automatically pass. After all, the Biden Administration has not prioritized a fourth round of checks. And while several senators wrote a letter earlier this year calling for more stimulus checks, it wouldn’t appear that enough senators support that measure to get it through the Senate, even without the filibuster in place.

This week, President Joe Biden announced an agreement with a bipartisan group of Senators, in order to pass an infrastructure bill, and that that agreement does not include any type of stimulus checks. However, some Democrats, including House Speaker Nancy Pelosi, are calling for a separate bill, with Democratic priorities, to pass alongside it, using the reconciliation process.

“We’ve struck a deal. A group of senators — five Democrats and five Republicans – has come together and forged an infrastructure agreement that will create millions of American jobs,” the president said on Twitter.

Stephen Silver, a technology writer for The National Interest, is a journalist, essayist, and film critic, who is also a contributor to The Philadelphia Inquirer, Philly Voice, Philadelphia Weekly, the Jewish Telegraphic Agency, Living Life Fearless, Backstage magazine, Broad Street Review and Splice Today. The co-founder of the Philadelphia Film Critics Circle, Stephen lives in suburban Philadelphia with his wife and two sons. Follow him on Twitter at @StephenSilver. This article is being republished due to reader interest.