France Has Reason to Boast About Its New Nuclear Missile Submarines 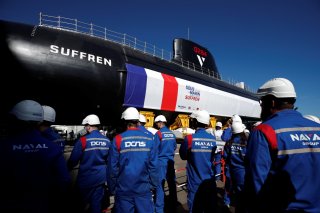 Here's What You Need to Remember: Like previous nuclear-powered ballistic missile submarines, the SLNE 3G class will like be berthed at the somewhat mysterious Île Longue in Frances’s north west. Île Longue is apparently one of the most heavily defended locations in France and facilitates relatively quick access to the Atlantic and Mediterranean oceans.

The SLNE 3G’s nuclear reactor is said to be a derivative of the reactor used on both the upcoming Barracuda-class, and the Charles de Gaulle aircraft carrier. In addition to on-board electronics, the reactor will power the SLNE 3G’s unique propulsion system—a pump-jet.

Like previous nuclear-powered ballistic missile submarines, the SLNE 3G class will like be berthed at the somewhat mysterious Île Longue in Frances’s north west. Île Longue is apparently one of the most heavily defended locations in France and facilitates relatively quick access to the Atlantic and Mediterranean oceans.