Is France's Anti-Tank MMP Better Than the American or Israeli Options? 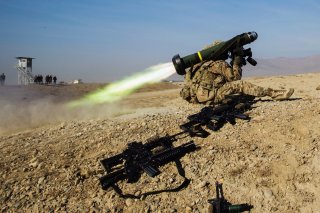 Here's What You Need to Remember: Nations that rely solely on Javelin for infantry anti-tank might find themselves in need of a longer-ranged system, which the MMP can provide.

At the end of the Cold War, the MILAN anti-tank missile used by the United Kingdom, France, and Germany was nearing obsolescence. While the UK and Germany replaced the MILAN with non-European missiles, opting for the American Javelin and Israeli Spike-LR, respectively, France decided to develop their own missile, the Missile Moyenne Portée (MMP).

While the process of developing a new missile made it take longer than the British and German replacements, the missile has some advanced features that the Spike and Javelin lack. But were these features worth the wait? Is the MMP really better than its competition? Could it be an export success?

Functionally, the MMP is closer to the Spike-LR than the Javelin. Like the Spike-LR, it has man-in-the-loop guidance enabled by a fiber optic link. However, it incorporates advanced features into the firing post that current versions that the Spike lack. Notably, the firing post is set up for net-centric warfare and even can fire remotely without a soldier directly operating it.

The net-centric warfare capabilities mostly revolve around the ability to use the NLOS capability of the MMP to hit targets behind cover. As with the Spike-LR, the MMP's firing post can see what the missile seeker sees. The firing post has a GPS and compass so that it can determine the azimuth it would need to face relative to a grid and cue the gunner in.

But in addition to the seeker feed, before firing, the firing post can receive video links from other sources, including UAVs. This can give the gunner a better idea of where to steer the missile after the initial launch and lead to better accuracy.

Seeker wise, the MMP is similar to the Spike in that it features a dual CCD/IIR seeker, however, both sensors are not used at once. The mode that's desired is selected before launch. This allows each seeker to have a wider field of view, making tracking moving targets easier.

In actual killing ability, the MMP brings some innovations versus its competitors. Like the Russian Kornet, the MMP places its rocket engine between the precursor warhead (the first one to strike armor) and the main warhead to increase the standoff distance and penetration.

It also has multiple fuzing modes, allowing it to perform limited building destruction and anti-personnel duty, although dedicated HE-FRAG and thermobaric ATGMs would be superior for that.

Interesting, the MMP also has some additional features like the ability to lock and fire the missile remotely. Such capability was present on some Soviet ATGMs like the Malyutka (albeit at a short range). This could significantly improve the survivability of an MMP team in urban combat, as the guidance team could be in a different room from the launch post in case it takes return fire.

Overall, the MMP's long developmental cycle probably resulted in one of the best designed anti-tank missile systems concerning capability. The team was able to observe foreign developments and look at the pros and cons of other ATGMs which reached production earlier.

The missile has clear influences from around the globe. The primary guidance method and fiber-optic link came from the Spike. The warhead design came from the Kornet. It also is rather forward-facing, incorporating net-centric warfare despite the lack of other platforms in the French Army that interface with a battlefield network.

Despite its features, the MMP’s late entry onto the market will probably make it difficult for it to find sales. Cost of the missile is rather high, due to it only being recently adopted by its only user, the French Army.

Other militaries have already adopted Spike, which provides a largely similar capability. Rafael is also continually updating the Spike, incorporating seeker improvements of its own, and adding net-centric warfare capability. Nations are likely to buy these firing post upgrades rather than convert wholly over to MMP.

The MMP's late development cycle has been a blessing and curse to it. It's gotten the best of many features, but it's arrived late to a mostly saturated market. However, it may find a place in supplementing or replacing Javelin systems.

Nations that rely solely on Javelin for infantry anti-tank might find themselves in need of a longer-ranged system, which the MMP can provide. Finally, since the MMP was developed off the back of French operational use of the Javelin, it addresses many issues France had with it, such as the lack of “man-in-the-loop” control.