The Future of Naval Warfare?: Get Ready for Flying Mines 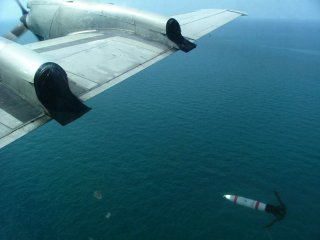 Here's What You Need to Remember: By delivering naval mines from longer stand-off distances, American bombers will be farther from harm’s way and therefore better protected. As tensions increase worldwide, potential hotspots like the South China Sea or the Persian Gulf may be places with potential for flying American mines. Enemies beware.

Like land mines, naval mines sit in wait for enemy traffic—not soldiers or tanks, but ships and submarines. These silent killers can be activated in a variety of ways, by direct physical contact, via magnetic detection, or by hearing movent in or on the water. Tedious and time-consuming to disarm—they are low-cost and are used to cut off an enemy’s access to mined areas.

In recent years, the U.S. Navy has fielded the SLMM (Submarine-Launched Mobile Mine) as well as 500, 1,000, and 2,000 pound Quickstrike mines. Like their land-based counterparts, naval mine technology is really old. Dr. George Ka’iliwai III, USINDOPACOM Director of Requirements and Resources told reporters that “current mine technology, while effective, has been largely unchanged since World War II.” But, the Navy recently built something new.

In a USNI article, a naval official was asked about the future of naval mines and said naval mine technology, “is changing big time. The Office of Naval Research has been involved in this for a while, and there are a lot of systems, Future Naval Capabilities, that are being tested.” The spokesman was a little short on details, however, saying somewhat mysteriously, “the future of mining will be clandestinely launched mines. And that’s probably as much as I can say here.”

By delivering naval mines from longer stand-off distances, American bombers will be farther from harm’s way and therefore better protected. As tensions increase worldwide, potential hotspots like the South China Sea or the Persian Gulf may be places with potential for flying American mines. Enemies beware.