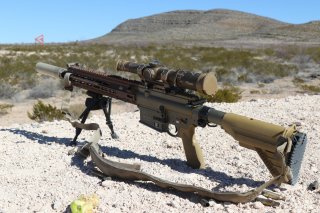 Key Point: The M110A1 will enable infantrymen to be more lethal at longer ranges.

Peter Suciu is a Michigan-based writer who has contributed to more than four dozen magazines, newspapers and websites. He is the author of several books on military headgear including A Gallery of Military Headdress, which is available on Amazon.com. This article first appeared last month and is reprinted here due to reader interest.