Get Ready, Russia: Could A New Vehicle Clinch The U.S. Army's Arctic Strategy? 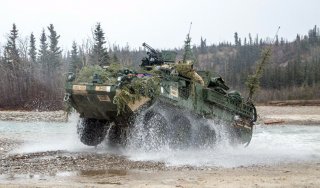 Here's What You Need To Remember: Having an Arctic-ruggedized combat vehicle certainly introduces a number of tactical advantages. Not only can it transport forces across dangerous, sub-zero terrain, but could perhaps at some point be configured as an unmanned variant designed to transport supplies, ammunition, fuel and other essential resources at minimal risk to soldiers.