Goodbye, F-35? How a New Stealth Fighter Might Be Born 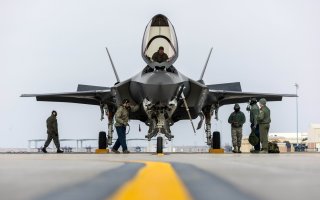 Here's What You Need to Know: A California-based aerospace company recently put a mysterious new prototype up into the air.

The airframe in question, Scaled Composites’ Model 401 first flew in 2018, though details on what the prototype plane is intended for are scant. The plane, tentatively called the “Son of Ares,” is a single-engine design that uses the same engine that Cessna’s Citation business jet used.

Interestingly, the engine’s air intake forms an arched arrangement on top of the plane’s fuselage and can reportedly propel the plane up to Mach 0.6 speeds. It has a maximum altitude of 30,000 feet.

Scaled Composites specializes in quickly getting unusual-looking and novel designs from the prototype stage into the air. One of their stated missions is to “demonstrate advanced, low-cost manufacturing techniques and to provide aircraft for research flight services to industry partners and the United States government.” With Washington as a customer, the question of stealth understandably comes up.

This could be a project that Scaled Composites is well prepared for. As the company name suggests, one of their specialties is manufacturing advanced airframes out of composite materials rather than the metals like aluminum or titanium that typically go into building airframes. Some composite materials also have the advantage of being harder to detect with radar.

Indeed, the so-called Son of Ares appears to incorporate some low-observable features into its design. Perhaps the most prominent of these is the plane’s nose. The 401’s chined nose is reminiscent of the F-22 Raptor, which also features noticeable chines running from the nose into the body.

The 401 also has steeply swept wings that angle upwards. It’s been pointed out that this wing sweep and upward, or dihedral, angle might be to give pilots good horizontal visibility and an unobstructed view from both left and right sides. This may make sense considering potential belly-mounted payload or pods.

A photographer managed to snap some photos of a pair of 401s flying over the Mojave Desert in Southern California. This time though, the 401s had some odd markings painted onto their fuselages. One of the airframes had a highly reflective type of material either painted or affixed to a patch below the cockpit on the plane’s left side. This mirror-like finish contrasted sharply with the other 401, which was painted matte grey, though it had several diamond-shaped patches of brown and a different shade of grey near the cockpit and tail.

Speculation has run rampant, though one of the more likely theories for the odd jet’s livery involves testing the Legion Pod, a relatively new infrared search and track system that Lockheed Martin developed. As of now, the system is compatible with F15C and F-16 aircraft. The mirror finish might be a way to test the Legion Pod’s capabilities, with the non-mirrored airframe acting as a control or baseline jet.

This is all still speculative. Stay tuned for more on the mysterious Son of Ares.