The Greek Navy's New Frigates Will Bolster NATO in the Mediterranean 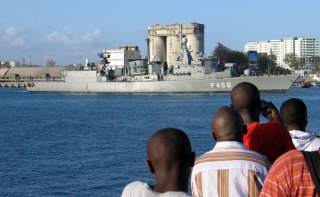 Here's What You Need Know: The Hellenic Frigate is armed with eleven VLS cells and a deck-launched, long-range, over-the-horizon Naval Strike Missile as well as 57mm guns and ship-defense weapons such as the Evolved Sea Sparrow Missile Block II and Rolling Airframe Missile.

The new Greek ship is also specifically engineered to support and operate within a NATO force by virtue of its embedded electronics, data link connectivity, command and control systems, and computing. The U.S. Navy LCS, for example, is built with a Combat System 21 command and control electronic system which aligns with the well-known and widely used Aegis radar architecture used on Destroyers and Cruisers. This common technological infrastructure enables broad connectivity with data links such as LINK 16 and enables interoperability with key allied platforms such as NATO helicopters, P-8 sub-hunting planes, and even F-16 multirole fighter jets.