Gunship Down: How Azerbaijan Shot Down a Russian Mi-24 Hind Helicopter 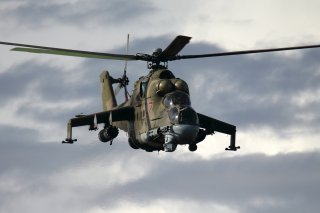 Here's What You Need To Remember: Some fifty air forces and air arms have operated different variants of the infamous aircraft that earned the nickname “flying tank.” The Mi-24 was first used in combat during the Ogaden War (1977-78) when it was flown by Ethiopian forces against Somalia and was operated extensively during the Soviet-Afghan War (1979-1989) when it was used to bomb Mujahedeen fighters.

It was reported recentlyly that a missile downed a Russian Mi-24 Hind military helicopter over Armenia, near the border with Azerbaijan. Two of the crew members were killed while a third was injured in the crash. The Russian aircraft was reportedly downed by a man-portable surface-to-air missile (MANPADS).