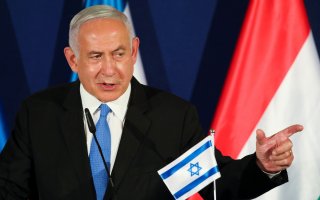 Israelis will go to the polls on Tuesday for the fourth time in two years, with the future of their prime minister, Benjamin Netanyahu, hanging in the balance. Public opposition to Netanyahu has only intensified in the past year because of his divisive politics and poor management of the Covid-19 pandemic. Yet his political survival owes much to the public perception that only he can be trusted when it comes to Israel’s security.

Netanyahu’s no-holds-barred opposition to Iran’s nuclear program and regional entrenchment has won him much support in Israel. Opinion polls over recent years demonstrate a broad consensus among Israelis against the Iran nuclear deal, the Joint Comprehensive Plan of Action or JCPOA. Although the agreement was flawed in its recognition of Iran’s right to nuclear enrichment and the temporary nature of the constraints it imposed, it still had the benefit of distancing Iran from a bomb for 10 to 15 years and included unprecedented verification and monitoring of nuclear sites.

Yet Israel’s prime minister believes that the agreement emboldened Iran by lifting sanctions that discouraged its regional malfeasance. Netanyahu’s deeply controversial appearance before the US Congress in March 2015 in which he attacked the planned nuclear deal with Iran was without precedent. His government is now continuing the same line of attack as the new US administration explores the possibility of rejoining the nuclear deal with Iran.

According to the outgoing deputy head of the Mossad, identified only as ‘A’, Netanyahu’s exposure of a nuclear archive captured in Iran was a key factor in persuading US President Donald Trump administration to withdraw from the nuclear deal in May 2018. The revelation of the archive confirmed suspicions that the Iranians had been working on a military nuclear program up until 2003. However, it didn’t provide evidence that the Iranians were violating the JCPOA.

With the US out of the deal and a new raft of sanctions imposed against Iran, a strong consensus emerged in Israel supporting the Trump administration’s action. Following the US assassination of top Iranian general Qassem Soleimani in January 2020, there was a widespread perception that Iran’s credibility and deterrent power had suffered. As internal opposition to the Iranian regime increased amid the growing pain of sanctions, criticism within Israel of Netanyahu’s decision to derail the Iran nuclear deal was muted.

However, the warning signs were there. The late Meir Dagan, a former Mossad chief, argued in 2015 that Netanyahu was causing Israel strategic harm by treating the Iran nuclear threat as an Israeli problem when the danger posed by Tehran was clearly a global one that required Israel to keep a low profile. Previous Israeli prime ministers Ariel Sharon and Ehud Olmert had understood this. Indeed, it was Netanyahu’s threats to bomb Iran that accelerated the efforts of the US and European countries to reach a nuclear agreement with Iran in the first place.

In 2015, many in the Israeli defence establishment welcomed the JCPOA. Lieutenant-General Gadi Eisenkot, then chief of the general staff of the Israel Defense Forces, described the nuclear agreement as a ‘strategic turning point’ that brought risks but also opportunities for Israel. Israel’s Atomic Energy Commission, the body advising the government on nuclear issues, maintained that the agreement’s inspection measures and restrictions on Iranian plutonium and uranium enrichment were sufficient to prevent Iran from producing a nuclear bomb. At the time, the IDF top brass were sanguine enough about the agreement to take the view that a delayed nuclear threat now provided Israel with space to switch its attention to Iran’s heightened presence in Syria and the threat from Hezbollah.

When the Trump administration threatened to withdraw from the deal, significant concerns were raised in Israel over the dangers that would bring. Opposition leader Yair Lapid, a critic of the agreement, maintained that it would be preferable for the US to stay in it and negotiate changes to its provisions. In January 2018, even fierce critics of the deal, such as the hawkish former defence minister Moshe Yaalon, warned that the costs of a US withdrawal would be greater than the benefits. Throughout, Israel’s defence establishment agreed that Iran had strictly adhered to the JCPOA during the period when the US was a party to it.

Yet Netanyahu chose to ignore the warnings and moved ahead in tandem with the Trump administration to incapacitate the deal. He has surrounded himself by yes men who support his position on Iran, such as Mossad director Yossi Cohen, a Netanyahu confidant and former national security adviser. As a result, critics of Netanyahu’s Iran policy have been marginalised. In the meantime, the unravelling of the nuclear agreement has resulted in the erosion of the restrictions that had shackled Iran’s nuclear activity.

In an explosive interview in Israel’s Yediot Ahronoth newspaper on 5 March, the outgoing deputy head of Mossad claimed that the situation now was worse than it was when the nuclear agreement was reached in 2015. Iran has stockpiled large amounts of enriched uranium, is rebuilding its nuclear facilities and blocking access to international inspectors, and has not stopped its regional expansion.

In the same interview, it was pointed out that Netanyahu made the mistake of trying to include Iran’s missiles, regional entrenchment and terrorism as part of any negotiations with Tehran, which in turn made the existential nuclear threat a lower priority. As a result, just as Israelis are about to go to the polls, Iran is closer than ever to obtaining a nuclear weapon. Netanyahu has acquired a global reputation as the leading opponent of Iran’s nuclear program, yet a major part of his legacy could become associated in time with Tehran’s possible emergence as a nuclear-armed state.

Azriel Bermant is a lecturer at the Hebrew University of Jerusalem and Tel Aviv University.

How to Lose the Nuclear Game in the Middle East