How to Lose the Nuclear Game in the Middle East 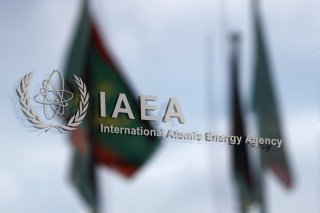 Amid a devastating pandemic that has killed more than two and a half million people globally, forced families apart, and upended the global economy, it is no surprise that Iran’s nuclear program isn’t dominating public discourse. Yet a collective failure to reckon with its dangers—and, more pressingly, of a deal that fails to permanently prevent Iran from obtaining the bomb—could have disastrous ramifications years down the line. Despite competing priorities, the international community cannot afford to sideline the Iranian nuclear issue and the risk of a major conflagration in the Middle East.

In today’s media environment, discussions on nuclear enrichment limits and advanced centrifuges, tedious on the best of days, can’t compete with immediate economic anxieties and vaccine distribution efforts in the United States or Europe. Even in Israel, news pundits are often more focused on upcoming elections than Iran’s nuclear brinkmanship.

Yet as immediate challenges consume public attention, Iran continues breaching limits on its nuclear program and hinting at future violations—including the possibility of boosting uranium enrichment to 60 percent. At the same time, the Biden administration is steadfastly moving to rejoin the 2015 nuclear deal with Iran, known as the Joint Comprehensive Plan of Action (JCPOA). While Tehran’s actions and threats are concerning, they are for now eclipsed by Washington’s eagerness to reenter a critically flawed agreement that may only exacerbate the threat of a nuclear Iran.

The JCPOA traded limited restrictions on Iran’s ability to develop a nuclear weapon in exchange for upfront and unconditional sanctions relief, among other perks. Critically, these restrictions are only temporary. Enrichment caps imposed by the deal expire by 2030, at which point Iran could maintain an industrial-scale program. Its breakout time to a nuclear bomb will be down to “a matter of months,” according to former President Barack Obama. International restrictions on Iran’s ballistic missile program will lapse even earlier, as restrictions on its conventional arms trade did this October.

So why was the JCPOA lauded by some? According to supporters, it could kick the problem of Iran’s nuclear program down the road. As Obama asked in 2015, “if the breakout time is extended for fifteen years and then it goes back to where it is right now, why is that a bad deal?"

Unfortunately, when the nuclear deal expires, Iran’s nuclear program won’t simply revert to where it is today. It will have been legitimized. The regime and its ghoulish network of partners and proxies, from Hezbollah and Hamas to Bashar al-Assad and Iraqi Shiite militias, will be enriched and empowered from years of sanctions relief. And with the lifting of restrictions on ballistic missiles and the deployment of advanced centrifuges, Iran will be left dangerously close to a bomb.

That’s why the expected U.S. reentry to the JCPOA is such an immediate concern. And it’s why those closest to Iran’s crosshairs, namely Israel and Tehran’s main Gulf rivals, have expressed opposition to the accord.

Iran already seeks to destabilize the Middle East in order to gain footholds and entrench friendly forces that challenge the sovereignty of its neighbors. A nuclear-armed Iran would likely be emboldened to double down on expansionist policies and directly undermine American interests, with even less fear of retribution. It would also become a greater menace to Israel, whose destruction has been described as "an achievable goal” by a top Iranian general.

Jerusalem is acutely aware of this threat. Indeed, IDF Chief of Staff Aviv Kochavi made abundantly clear this January that the military was developing operational plans, in light of the possibility that Iran will race to a bomb. Israel has also recently moved to acquire Boeing KC-46 refueling tankers, F-35 fighter jets, heavy-lift helicopters, and advanced munitions. Should diplomacy ultimately fail to sufficiently constrain Iran’s nuclear program, Israeli leaders may decide to pursue a military option, having made clear that the regime cannot be allowed to go nuclear. Iran’s response could escalate to a massive regional conflagration.

To their credit, President Joe Biden and his team have at least called for strengthening and extending the accord. Yet the White House is expected to lift sanctions once Iran resumes compliance with the JCPOA, and before securing requisite improvements to the deal. This would be a major blunder that erodes the leverage accrued by the previous administration’s “maximum pressure” campaign. Without the prospect of economic relief, Tehran will have less incentive—and Washington less power—to reach a more tolerable agreement.

A return to the status quo of the JCPOA, in which Iran maintains a path to a bomb while reaping the rewards of sanctions relief and normalized trade, is intolerable. It is not an issue that can be safely deferred for a few years, but one of immediate urgency. A failure today could haunt the world for generations.

IDF MG (ret.) Yaacov Ayish is a former Israeli Defense Attaché to the United States and Canada, and former head of the IDF General Staff Operations Branch. He is Senior Vice President for Israeli Affairs at the Jewish Institute for National Security of America (JINSA).

Iran and the Wrath of Esther