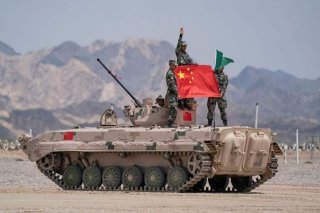 Here's What to Remember: Unsurprisingly, China and Russia are identified as the only two threats with “formidable” capabilities against the United States, Iran and North Korea, meanwhile, are classified as “gathering” threats.

The Heritage Foundation published the 2022 edition of its annual Index of U.S. Military Strength last week. The major headlines centered on the report’s bleak assessment of the U.S. military services, but the index also featured a comprehensive analysis of the major threats confronting vital U.S. interests. Here are the highlights.

The report evaluated China, Russia, North Korea, Iran, and various non-state actors in three categories: behavior, capabilities, and threats to American interests. As with previous editions of the Military Strength Index, Moscow and Beijing continue to loom large in Heritage's threat assessment. Russia, the report contends, “remains the primary threat to American interests in Europe as well as the most pressing threat to the United States.” The report points to Moscow’s “massive pro-Russia propaganda campaigns in Ukraine and other Eastern European countries,” as well as its support for the separatist Donetsk and Luhansk People’s Republics to Ukraine’s east and recent military buildup near the country’s eastern border, as evidence of the Kremlin’s hostile intent.

China is described in the report as “the most comprehensive threat the U.S. faces.” Beijing “remains ‘aggressive’ in the scope of its provocative behavior and earns the score of ‘formidable’ for its capability because of its continued investment in the modernization and expansion of its military and the particular attention it has paid to its space, cyber, and artificial intelligence capabilities.” The report further cites China’s crescendo of maritime and aerial provocations against Taiwan, military assertiveness in the South China Sea, and probes of the South Korean and Japanese air defense identification zones.

Unsurprisingly, China and Russia are identified as the only two threats with “formidable” capabilities against the United States, Iran and North Korea, meanwhile, are classified as “gathering” threats. Though North Korea has so far not conducted nuclear tests in 2021, Pyongyang’s other missile tests—including the recent launch of what appears to be a hypersonic boost-glide vehicle missile system—continue unabated. Iran is “by far the most significant security challenge to the United States, its allies, and its interests in the greater Middle East,” as evidenced by Tehran’s “open hostility to the United States and Israel, sponsorship of terrorist groups like Hezbollah, history of threatening the commons, and increased activity associated with its nuclear program.” Iran’s challenge lies more in its sweeping use of irregular warfare than the conventional threat posed by its armed forces, according to the report. Lastly, non-state terrorist groups including Al Qaeda and Islamic State of Iraq and al-Sham are identified as “capable” threats—albeit on a lesser scale than the other four state actors discussed by Heritage. “Fortunately, Middle East terrorist groups remain the least capable threats facing the U.S., but they cannot be dismissed,” the report concludes.