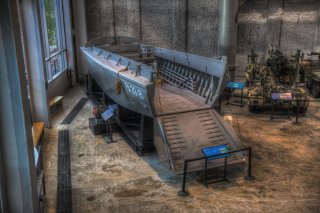 Here's What You Need To Remember: The boat's crucial innovation was the ramp. With previous boats, men had to jump over the sides, exposing them to enemy fire. The ramp allowed for a more orderly landing - although it was certainly still risky. (A faithful replica of a Higgins Boat is used in the landing scene in Saving Private Ryan.)

The boat’s usefulness could not be overstated. Dwight D. Eisenhower, the Supreme Allied Commander sang Higgins’ praises, stating that “Andrew Higgins is the man who won the war for us.” He went on to explain, “If Higgins had not designed and built those LCVPs, we never could have landed over an open beach. The whole strategy of the war would have been different.” A resounding endorsement from the one of the greatest generals of one of the greatest wars.