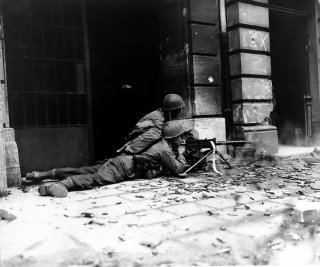 The term "antiquated" is often used to describe military equipment that is outdated and past its prime, and there are many examples of hardware that should have been retired far sooner. Then there are examples of "classic" military hardware that can go the distance and then beyond.

Case in point, the Air Force's B-52 bomber could be flying for close to 100 years by the time the fleet is finally retired.

Then there is the case of gun designer John Browning's M1919 .30 caliber machine gun. It is still used in limited capacity by militaries around the world, while it also served as the basis for the M2 .50 caliber heavy machine gun, which has remained a front line weapon nearly 70 years after it was introduced.

As The National Interest previously noted, Browning was arguably a combination of Leonardo de Vinci, Benjamin Franklin and Thomas Edison. He was a forward-thinking designer – who developed his first gun design when he was just 13 – and as firearms technology progressed, he progressed with it. For any inventor that is extremely important because instead of being left in the past, Browning was the designer that forged the future of firearms. He developed the Colt M1911 .45 pistol and the Browning Automatic Rifle for the U.S. military and both remained in service for decades!

His first machine gun, which he developed for Colt Firearms as the Model 1895, used an operating system that was based on his lever action rifles that he designed for Winchester.

While that particular machine gun design performed quite well during the Spanish-American War, and was even adopted by militaries around the world, Browning continued to consider other designs and in 1903 filed a patent for a recoil-powered automatic gun – similar in concept if not actual design to Hiram Stevens Maxim's machine gun.

Both Browning's and Maxim's weapons utilized the principle of recoil operation, water cooling and forward ejection, but there were notable differences in the respective designs. Browning's featured a sliding-block locking mechanism that saved weight but more importantly reduced the complexity of the operation. A less important distinction was the fact the Browning fed left-to-right, opposite of the Maxim design.

It took the better part of a decade, but Browning finally revisited his design in 1910 and built a prototype. With its water jacket and basic shape, the similarities to the Maxim remained; yet at 103 pounds including the gun, tripod, water and ammunition it was still considerably lighter than the British or German models based on the Maxim, which weighed in at more than 137 pounds. However, Browning was far from satisfied yet was unable to take his design forward.

His break came when the United States entered the First World War in April 1917. The U.S. arsenal was woefully lacking in machine guns, and those that they had were out modeled, out dated and, simply put, outclassed. Previously, the United States Army Ordnance Department had shown little interest in a new machine gun, but the butcher's bill in Europe convinced them that a new model machine gun was required. Browning quickly arranged a test at the Springfield Armory in May 1917 and his weapon performed extremely well.

The Browning-designed U.S. Model 1917, chambered in the M1906 .30-06 ball cartridge, was soon adopted as the Army's principal heavy machine gun. However, it only saw limited service during World War I, but it wasn't a fault of the design. Production delays mean that only about 1,200 of the new heavy machines guns ever made it to Europe and those were only used in the late closing stages of the war. Still the Browning design proved successful, and the more than 128,000 M1917s would eventually be produced in total.

Even with this success, Browning reconsidered his design, and one notable factor remained its weight, which significantly limited the ability to move the weapon forward in an attack. The water jacket, which cooled the barrel, meant that the heavy machine gun was heavy in weight as well as firepower. This is why similar designs such as the British Vickers and German MG08 were only used in fixed positions as defensive firearms. The Russians tried to add mobility to the Maxim; its M1910 was mounted on a wheeled mount with gun shield. The Germans created a modified MG08/15 that featured a pistol grip and buttstock but kept the water jacket.

Browning sought to make a more portable machine gun. The biggest change would be to ditch the water jacket.

The result was the U.S. Model 1919, which was still chambered for the powerful and effective .30-06 cartridge. More importantly, unlike the other ground-mounted machine guns of the era the M1919 featured an air-cooled barrel, which was heavier to reduce overheating, but it was also easier to maintain in combat conditions than the M1917 machine gun or its water-cooled cousins.

While it originally utilized the same cloth ammunition belts as the M1917, the M1919 was further refined to accept a metal M1 ammunition link – the first-of-its-kind disintegrating belt. This provided the benefit of allowing a single round to hold two links together, while more could be added to make up a belt of any quantity of rounds.

By the outbreak of the Second World War, the military also developed a new tripod that was smaller and far more compact. This allowed the M1919 machine gun to take the role of a medium or even light machine gun and serve as a company or battalion support weapon. It still required at least a two-man machine gun team, but in most cases four men were charged with carrying the gun and its ammunition.

However, it was light enough that the gun went forward in an attack instead of being left in a fixed position like the older Maxim designs.

Browning didn't live to see the M1919 in action in World War II, but he likely would have been proud of how it performed with the Marines in the Pacific and the Army in Europe.

If he would have had a complaint, it might have been the attempts to "refine" and "improve" upon his design. The worst of which was the M1919A6 – as it featured a bipod similar to the one used on the BAR as well as a carry handle that was attached to the barrel jacket. The most notable differences were the addition of a metal buttstock and a lighter barrel with a muzzle booster. Unlike other versions the M1919A6 featured a barrel that could be more easily changed out to reduce overheating. The goal was to create a general purpose light machine similar to what Germany employed in World War II. However, the M1919A6 at 32 pounds was heavier than the German MG34, which weighed 26 pounds, while the barrel changing with the A6 version wasn't nearly as quick in practice as the designers promised.

A far bigger "refinement" with Browning's M1919 design was the military's ability to "upsize" it as the M2 .50 caliber machine gun, which even 80 years later shows no sign of going away soon.