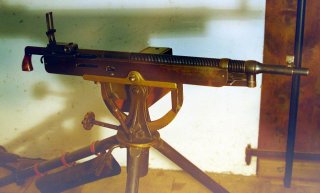 While developed after the now-infamous Maxim gun, the John Browning-designed Colt-Browning M1895 machine gun has the distinction of being the first truly automatic weapon adopted by the U.S. military and the first to be used in combat by American forces. Unlike the Maxim/Vickers machine guns that required a team of four to move and operate the M1895 was small and light enough that a team of two soldiers could effectively handle the weapon.

Yet the gas-operated, lever-actuated weapon still packed quite a punch. It had a rate of fire of 400-450 rounds per minute (rpm), which was slower than the 550 to 600 rpm of the Maxim. However, this was quite significant as soldiers only a few decades earlier were still lucky if they could fire three to four rounds per minute.

More importantly, the low rate of fire combined with a heavy barrel allowed the Colt M1895 to be air-cooled—whereas the Maxim was water-cooled. This is what helped make the Browning-designed machine gun simpler, lighter and notably more portable.

As noted, unlike the recoil-operated Maxim, the Browning weapon was gas-operated—and became the first successful gas-operated machine gun to be adopted by any military. The operating system was also a modification of a proven—if albeit not entirely new—design. In fact, it was based on a mechanism John Browning and his brother Matthew S. Browning had developed for the level action rifles such as the Winchester 1886. This unique system featured a level that cycled at the bottom of the gun—similar to the handle on the Winchester rifles—and when the weapon was low to the ground it would actually dig a small hole, which gave it the colorful moniker “potato digger.”

The U.S. Navy was the first to test a 6-millimeter version of the M1895 and found that it was capable of firing bursts of more than one thousand rounds before the barrel overheated. While it could continue to operate the bullets would be considerably less accurate. Soon it was apparent that short bursts were the best way to operate the weapon to avoid overheating or stoppages.

The U.S. Army, Navy and Marines all adopted the weapon—and originally it was chambered in the 6-milimeter Lee Navy, but later with the adoption of the Krag-Jorgensen rifle, the M1895, was chambered in .30-40 Krag, while the U.S. military later produced a final version of the M1895 in .30-06 Springfield. Variants produced for foreign militaries included those chambered for Spain's 7x57mm Mauser, .303 British, 7.62x54 millimeter for Imperial Russia and 6.5x52 millimeter Carcano for the Kingdom of Italy.

The Colt-Browning M1895 first saw use with the United States Marines in the Spanish-American War during the invasion of Guantanamo Bay, but it was during the campaign in Cuba where two of the weapons gained notoriety and a place in history.

An oft-repeated tale involving the guns tells of William Tiffany, a socialite friend of future President Theodore Roosevelt, who joined the first United States Volunteer Cavalry—but many of the details are simply wrong or misstated.

First: the back story on Tiffany and the unit.

It is true that William Tiffany was a good friend of Roosevelt, who was originally second in command of the unit that eventually became known as the Rough Riders. When the unit was formed it was largely composed of frontiersman from the Indian Territory, Arizona and New Mexico territories. But once Roosevelt joined its ranks, it soon attracted his Ivy League friends, among a mix of colorful characters.

Roosevelt, who had served as Assistant Secretary of the Navy, used his influence in Washington to ensure the volunteer regiment would be equipped to serve as any regular Army unit. The unit received the latest Model 1896 carbines but it was Tiffany who aided in providing the extra firepower—a pair of the Colt M1895 machine guns chambered in the Spanish 7x57 millimeter.

Numerous accounts—including the made-for-TV miniseries Rough Riders—suggest these guns were proved by William Tiffany's father. Over the years sources suggested that William’s father was Charles Lewis Tiffany, the founder of the famous Tiffany & Co. department store or Louis Comfort Tiffany (son of Charles Lewis), the American artist known for his work in stained glass.

The story of how the department store owner or artist (depending on the version) likely sounded good.

But it is wrong. As the NRA’s American Rifleman noted, Tiffany was actually the son of Newport, Rhode Island, scions George and Isabella Tiffany; and his father George certainly couldn’t have donated the guns to the unit as he died in 1886. The actual version is that Tiffany helped pay for one of the two machine guns, while it is believed the other was split among the other socialite friends of Roosevelt.

It was likely a case of when you’re wealthy and want to “play at war” why not bring the absolute best that money can buy. This was also years before the National Firearms Act of 1934, which highly restricted civilian ownership of machine guns. At the time the Colt Firearms Company would happily sell to almost anyone who wanted one of its weapons!

Both weapons were used in the charge of San Juan Hill—and for his service, William Tiffany received a battlefield commission to lieutenant. However, he succumbed to the Cuban (yellow) fever and lack of proper nourishment and died during the campaign. He was just twenty-five years old.

One of the two “Tiffany Guns” is now in the collection of the NRA Museum—a testament to the American military’s first automatic weapon and to William Tiffany for wanting the best weapons to help his unit in combat.