The History Books Missed This: How an F-15 Killed a Satellite in 1985 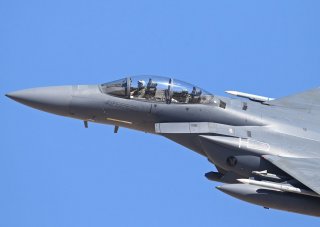 Key Point: Planes that can fly high enough can carry an anti-satellite missile. Here's how America proved it was doable.

Decades before the creation of the United States Space Force, the sixth and newest branch of the United States military, there were already plans in place to bring future conflicts beyond the Earth's atmosphere. A number of killer satellites have been deployed over the years, but in the late 1970s the U.S. saw that threat. The worry was that the Soviet killer satellites could destroy vital U.S. reconnaissance and communication satellites and developed a variety of anti-satellite missiles to counter the threat.

Among these was the ASM-135A, which was unique in that it wasn't launched like a rocket from the ground – such as the Nike-Zeus or Thor anti-ballistic missile systems – but rather it could be fired from an aircraft in flight. Airborne tests with "captive" – not launched – anti-satellite missiles (ASATs) that could be fired from modified F-15 fighters began in 1982.

Additional tests were conducted over the Pacific Ocean where the ASAT was launched at a specific point in space and fired, but no actual target was involved.

Finally, on September 13, 1985, during a mission dubbed the "Celestial Eagle Flight," Major Wilbert "Doug" Pearson pushed the "pickle button" in the cockpit of his F-15A and launched an ASM-135A at a real target while in a steep vertical climb flying at 38,100 feet while flying just under Mach 1 over the Pacific Ocean. It was quite an accomplishment to aim and fire the ASM-135A ASAT at the Solwind P78-1 solar observation satellite, which was operational but several of its instruments were failing.

The satellite was also moving at 17,500mph some 300 miles above the F-16A – a target Pearson couldn't see. He had to wait for confirmation that the ASAT was able to lock on and destroy its target – and he was soon told from ground control that he was indeed successful. For the first time in history a satellite had been shot out of space by an airplane!

The squat, yet very high-tech projectile carried no high explosives, and rather the mission called for the destruction of the Solwind P78-1 by means of the violent collision. It was not only a first but more importantly, this feat has never been accomplished again.

It was anything but blind luck, however. Two solid-rocket stages propelled the missile into space, which was crucial because the miniature homing vehicle (MHV) that was used to lock onto the satellite's infrared image with a telescopic seeker could only point itself in the direction of the target. The short homing vehicle was a short cylinder that was compared to a tomato can – but a high-tech one that spun rapidly for stability and course correction, yet without forward thrust. For that reason, it was crucial that the F-15 pilot had to fly to an area below the path of the incoming target when firing the ASAT. This required a steep climb and a very small launch window.

Even before Pearson's flight, however, the U.S. Congress had begun to enact a series of limits on the program's testing. Perhaps in part because of its success, lawmakers banned further tests on targets in space. There were legitimate concerns that ASAT experiments would lead to a superpower arms race and in 1988 the United States Air Force terminated the program.

The Russian military has recently conducted tests of its PL-19 Nudol, a so-called "direct-ascent anti-satellite" weapon platform, so perhaps it is time for the U.S. Department of Defense (DoD) to take another look at the Cold War ASM-135A ASAT.