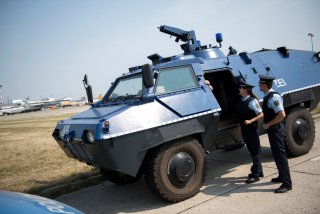 Here’s What You Need to Remember: Though not in American military service anymore, it was in use with the Los Angeles Police Department for a time.

The Commando was originally manufactured by Cadillac Gage, now known as Textron, in the early 1960s for use with American Military Police (MP) units in Vietnam. But despite the Commando’s original role as an MP vehicle, its unique design lent itself well to service in the thick jungles and wet Vietnamese terrain.

The relatively small vehicle had a modest, 3-man crew made up of gunner, driver, and commander but also had just enough internal space to cram a whopping 9 other soldiers inside.

One of the Commando’s strengths was its height: depending on the variant, the Commando was either just under or just over 8 feet tall. This was partly thanks to the vehicle’s large, knobby rubber tires.

The tires were of a unique construction—and despite being wheeled rather than tracked, the Commando nonetheless had excellent off-road mobility thanks to their width, which afforded the vehicle low ground pressure and prevented the Commando from becoming bogged down in sand or other soft terrain. They were also exceptionally tough—even if punctured, the wheel’s robust sidewall construction allowed for a further twenty-five miles of travel.

The four-wheel drive vehicle’s ground clearance reduced the effectiveness of mines, as the vehicle body was physically high off the ground, and gave good visibility through the tall, thick brush and vegetation endemic to the jungles of Vietnam. An excellent informational video of the Commando can be seen here and is well worth the watch.

Another of the Commando’s strengths? Its amphibious capability. Thanks to a fully waterproofed engine, and the previously-mentioned large-diameter knobby tires, the Commando could charge into rivers at speeds of up to forty miles per hour and immediately begin swimming without any swim modifications.

A number of Commando variants were introduced and in use the Marine Corps, Military Police, Air Force, and the Army of the Republic of Vietnam though the most noteworthy difference between the models were their armament.

Originally equipped with several M1919 machine guns, these were eventually swapped for other 7.62 NATO-standard machine guns to provide ammunition commonality between the Commando and crew weapons. Heavier, .50 caliber machine guns could also be substituted.

Though not in American military service anymore, it was in use with the Los Angeles Police Department for a time. In service with the LAPD, the Commando swapped out its machine guns for a long, 14-foot battering ram used to break down doors of suspects that were considered armed and dangerous. An interesting afterlife for an interesting armored car.